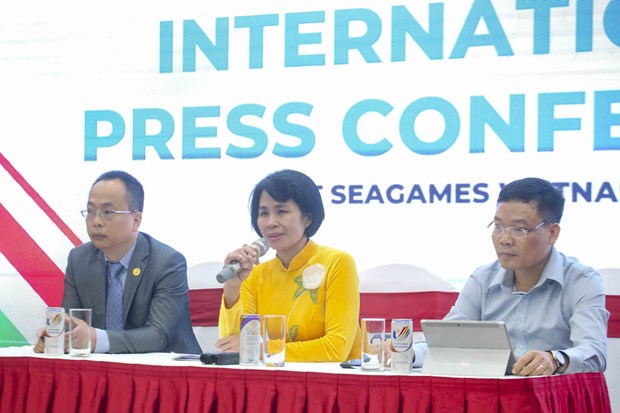 Hanoi (VNA) – With over 2,000 journalists, including 400-500 foreign correspondents, registering to cover the 31st Southeast Asian Games (SEA Games 31), communication work has brought information about the event to both domestic and international sport fans in real time and spread positive messages about the regional sporting event.

That was the assessment of Le Thi Hoang Yen, deputy head of SEA Games 31's sub-committee for information and communications at the third international press conference of SEA Games 31 held on May 21.

Yen, who is also Deputy General Director of the Vietnam Sports Administration, said the organising committee has created the best possible conditions for journalists to send their work back home. The committee also provides transport means for foreign correspondents to travel to competition venues outside Hanoi.

Information on competition schedules, venues has been updated timely, and local authorities have also done well in promoting the sport events, attracting many local residents to watch competitions and cheer on athletes.

Yen reported that all participating teams were pleased with the organisational work and the warm support of Vietnamese people.

During the time the SEA Games 31 is rolling out, many cultural and tourism activities have been held to promote Vietnam to foreign guests.

At the press conference, the organising committee also informed the media about the closing ceremony, to take place on May 23 at the Indoor Athletics Palace in Hanoi, during which the SEA Games flag will be handed over to Cambodia, the host of the next SEA Games./.

Communication work succeeds in popularizing SEA Games 31 have 379 words, post on en.vietnamplus.vn at May 21, 2022. This is cached page on VietNam Breaking News. If you want remove this page, please contact us.