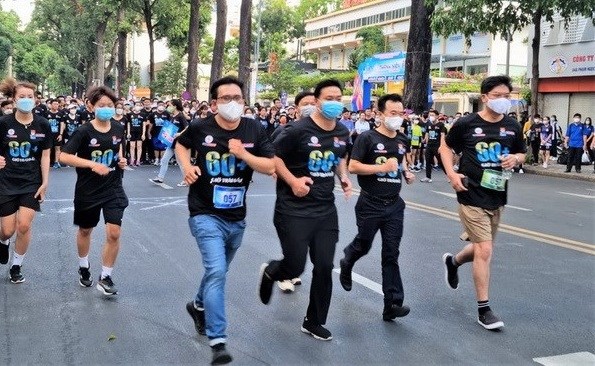 The event is intended to encourage young people to improve their physical health and raise public awareness of limiting the use of vehicles that produce emissions, causing environmental pollution.

Up to 1,500 people participated in the 3,500m run from the headquarters of the city’s HCYU to the Youth Cultural House.

The organisers handed over one first prize, one second prize, one third prize and five consolation prizes to each of the men’s and women’s groups.

Started in 2007 by WWF and partners as a symbolic lights-out event in Sydney to raise awareness of climate change, Earth Hour is now one of the world’s largest grassroots movements for the environment. Held every year on the last Saturday of March, Earth Hour engages supporters in more than 190 countries and territories, all taking action to ensure a brighter future for people and the planet.

Earth Hour has also gone far beyond the symbolic action of switching off – it has become a catalyst for positive environmental impact, driving major legislative changes by harnessing the power of the people and collective action.

Earth Hour is open-source and we welcome everyone, anyone, to take part and help amplify our mission and impact.

Thousands run in HCM City in response to Earth Hour have 409 words, post on en.vietnamplus.vn at March 26, 2022. This is cached page on VietNam Breaking News. If you want remove this page, please contact us.