At the meeting with the newly-appointed Consul General of Cuba, the city Party Chief stressed that the special friendship and comprehensive cooperation between Vietnam and Cuba has been developing for the past 60 years. People of the two countries are always sided by side to mutually overcome difficulties and obstacles. The relationship between the two countries is a model of sustainability and mutual trust.

Secretary Nguyen Van Nen pleasured at the continuous development of the two sides in various fields and believed that with her diplomatic experiences,  Ariadne Feo Labrada would be a bridge to promote the relationship between Vietnam and Cuba generally and HCMC and Cuba particularly in terms of medicine and biotechnology.

On the occasion, HCMC Party Chief Nguyen Van Nen sent his thankfulness to the Cuban Government and people for paying special attention to supporting the city authorities and residents in the fight against the Covid-19 pandemic.

Newly-appointed Consul General of the Republic of Cuba to Ho Chi Minh City Ariadne Feo Labrada affirmed that she has always extended special sentiment to the S-shaped country and considered it as her second fatherland.

According to her, many Cuban companies have invested in Vietnam in the fields of biotechnology, medicine and construction; and Cuba is ready for supporting Vietnam in the development of the medical sector or biomedical technology transfer. On the occasion, Ms. Ariadne Feo Labrada also expressed her thankfulness to the Vietnamese Government and people for assisting her country in the Covid-19 fight, especially in the context of the Cuban economy impacted by the pandemic. 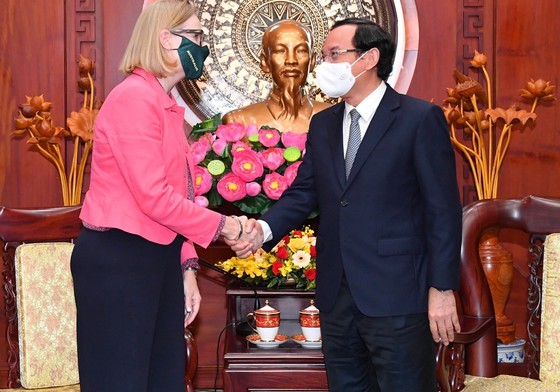 At the meeting with newly-appointed Consul General of Australia to Ho Chi Minh City Sarah Hooper on the same day, HCMC Party Chief Nguyen Van Nen extended his thankfulness to the Australian Government and people for supporting the city to fight against the Covid-19 pandemic. Mr. Nguyen Van Nen stressed the great potential for cooperation between the two sides in terms of trade, tourism, education, science and technology, and he also desired that Ms. Sarah Hooper would contribute to promoting bilateral cooperation in fields of Australian strength and city's demands.

Ms. Sarah Hooper informed that Australia and Vietnam would celebrate the 50th anniversary of diplomatic relationship establishment next year. The Department of Foreign Affairs and Trade of Australia wished that the strategic partnership between the two countries will be upgraded to a comprehensive strategic partnership in the special year of 2023, contributing to further expanding cooperation in the fields of national defense, trade and blue economy.

Consul General of Australia to HCMC Sarah Hooper stressed that this would be a golden time to promote the relationship and cooperation between the two countries, and many Australian enterprises desired to look for investment opportunities in the city.

HCMC to promote cooperation relations with Cuba, Australia have 623 words, post on www.sggpnews.org.vn at March 30, 2022. This is cached page on VietNam Breaking News. If you want remove this page, please contact us.