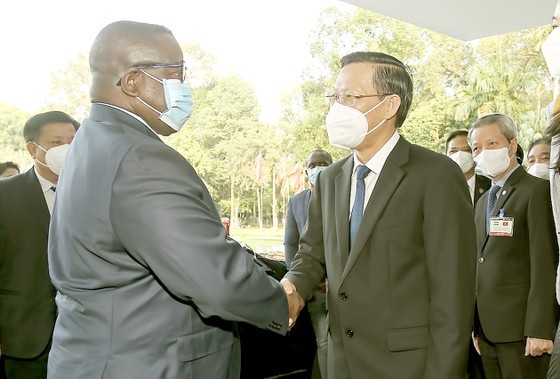 On this visit to mark the 40th anniversary of the establishment of Vietnam- Sierra Leone diplomatic ties , the city leader proposed to strengthen mutual exchanges, share experiences and seek cooperation opportunities in the fields of agriculture, science and technology, and consumer goods.

The President of Sierra Leone believed that this visit will promote the relationship between the two nations generally and between HCMC and his country particularly.

The Government of Sierra Leone has a great concern about farming techniques and productivity of agriculture, aquaculture and rice from this visit. The partner expressed its desire to strengthen cooperation between farmers of the two sides and learn experiences from Vietnam to supply domestic needs in rice production instead of importing rice as currently; and wished to cooperate with HCMC in the application of high technology into agriculture and e-government.

On the same day, President Julius Maada Bio led a delegation of the country to visit and work with the Management Board of Saigon Hi-tech Park.

HCMC, Sierra Leone concentrate on agricultural, technological cooperation have 408 words, post on m.sggpnews.org.vn at March 20, 2022. This is cached page on VietNam Breaking News. If you want remove this page, please contact us.