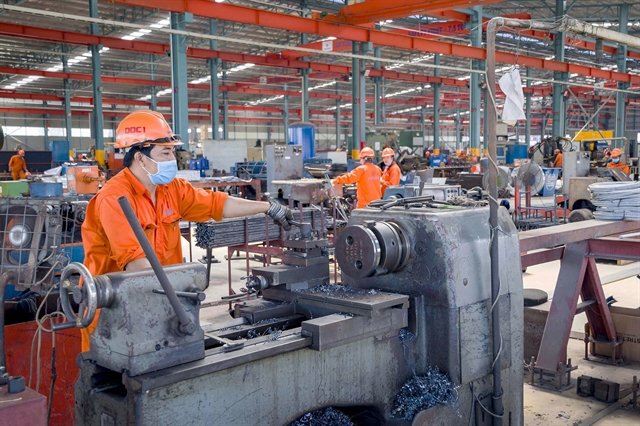 HÀ NỘI — Every year after the Tết (Lunar New Year) holiday, many businesses face a serious shortage of workers. Last year, due to the impact of social distancing orders, enterprises struggled with a shortage of labour. Therefore, the need to prepare the workforce for the post- Tết period is even more urgent.

To prepare to return to production after the week-long holiday, representatives of many businesses said that they had focused on attracting and recruiting workers a month in advance.

Companies had participated in many different recruitment channels such as job sessions, forums and social networks. They even encouraged workers to introduce acquaintances but so far companies have not yet recruited enough people.

Nguyễn Thị Thuỳ Vân, chairwoman of the Union of Long Rich Co. said that the company had lost about 500 workers during the pandemic, so it is necessary to retain current employees to return to work after Tết .

“Every year, there is a small number of workers who go home for Tết holiday and do not return to work, and the company can still manage to recruit new workers. But this year the situation is very unpredictable," Vân told VNeconomy. "Many workers who returned to their hometown due to the spread of COVID-19 have not come back yet."

Nguyễn Đăng Hiến, general director of Bidrico Company, also said that ensuring the workforce after Tết was now a challenge for many businesses.

Every year workers don't return to work at the same time, but this year it is expected that more workers will stay at home longer than previous years because their family members test positive with coronavirus or are afraid of getting the virus if using public transport.

According to Hiến, to retain employees, the company continues to ensure salaries, bonuses and seniority allowances for employees. It also allows workers to receive an advance payment of VNĐ5 – 10 million (US$220 – 441) to prepare for Tết .

“If enterprises take good care of workers and have adequate remuneration, workers will stay with the enterprises, and return to work soon," said Hiến.

Regularly the southern factories under the Việt Nam National Textile and Garment Group (Vinatex) are short of about 10 per cent of workers, equivalent to 6,000 people after the Tết holiday. Therefore, they have created many plans to retain workers.

Nguyễn Thị Thủy, vice chairwoman of the Union of Vinatex, said that during this period, commitments to ensuring jobs and income were the most effective way to retain workers.

The Union of Industrial Parks and Export Processing Zones in HCM City said that due to the varying quarantine rules among localities, this year many businesses allowed workers in remote provinces to return home 1-2 weeks earlier.

To retain workers, many businesses also organise shuttle buses and reward employees who return to work on time.

Many businesses have increased bonuses to keep workers in the city, helping factories complete orders on schedule.

It is estimated that about 98,000 workers will be staying in industrial parks and export processing zones during this year's Tết holiday.

However, the survey showed that after Tết , businesses still need to recruit about 10 per cent more workers to expand their production scale.

The People’s Committee of Hồ Chí Minh City had sent guidelines to organisations to support workers, especially those who don't return home.

The City is also preparing plans to coordinate human resources after Tết .

Nguyễn Văn Lâm, vice president of the HCM City Department of Labour, Invalids and Social Affairs, said that after the Tết holiday, the city was expected to need about 45,000 skilled workers, especially in trading, leather and footwear, and mechanical engineering.

To provide enough resources for businesses in the area, the HCM City Department of Labour, Invalids and Social Affairs had directed employment service centres to organise meetings and introduce workers from other provinces and cities to HCM City to work after Tết . — VNS

Enterprises prepare workforce shortage after Tết have 830 words, post on vietnamnews.vn at February 7, 2022. This is cached page on VietNam Breaking News. If you want remove this page, please contact us.