A war between Russia and Ukraine, the top producers and exporters of sunflower oil, will create a supply crunch in the market, leading to even higher prices. Source: Reuters

After a brief lull, edible oil prices are shooting up yet again. Malaysian palm oil futures climbed to their all-time high on February 23 as tensions between Ukraine and Russia escalated. A war between the two nations, the top producers and exporters of sunflower oil, will create a supply crunch in the market, leading to even higher prices. India will be hit harder than others as 90 percent of the country's sunflower oil imports are from Russia and Ukraine.

Edible oil prices have been climbing unabated globally and in India since the onset of the pandemic. The climb has been so steep that the Indian government had to take several measures to rein in the increase in prices.

The government interventions taken so far, however, are not going to be enough as the supply of edible oils such as palm oil and sunflower oil is interrupted again. Read on to find out what triggered the rise in oil prices in 2021, how government measures helped check the climb, why they are set to rise yet again, and how it will impact the FMCG industry and end consumers.

What caused the jump in edible oil prices in 2021?

Unfavourable weather in major oil-exporting countries such as Indonesia, Malaysia, Argentina, Ukraine and Russia, which impacted the production of oil, coupled with a labour shortage in Malaysia due to the pandemic led to a decline in exports from the largest oil producer countries.

Indonesia and Malaysia also had introduced the B30 and B20 biofuel mandates last year, which increased the number of vegetable oils mixed in fuel, leading to higher local consumption and leaving a lower exportable surplus.

Soybean oil prices rose last year because of dry weather in Argentina, the largest exporter, and higher demand from major consumers India and China. Sunflower oil prices were up because of drought-like conditions in Ukraine and Russia.

As the imports from these countries fell, the prices started to climb globally and in India. The input costs of HoReCa (hotel/restaurant/cafe) and FMCG industries, the top consumers of edible oils, especially palm oil, went up significantly and after a while, they passed it on to consumers. The government then stepped in as the common man started to feel the pinch.

What measures were taken by the government?

"The government slashed prices six times in 2021 and now practically duty is only 5.5 percent," said Mehta.

In August, the government also announced an investment of Rs 11,040 crore to boost the cultivation of palm oil in the country under the National Mission on Edible Oils – Oil Palm. Under this mission, it will offer assistance to farmers for planting materials of Rs 29,000 per hectare compared with Rs 12,000 per hectare earlier. The initiative aims to increase palm oil production in the country from 0.25 million tonnes in FY20 to 1.120 million tonnes by FY26. The government aims to bring 10 lakh hectares under palm oil cultivation versus 3.54 lakh hectares in FY20.

At its peak in 2019, India consumed about 10 million tonnes of palm oil, of which only 0.25 million tonnes was produced domestically while the rest was imported (mostly from Indonesia and Malaysia), shows data from ICRA

Did government interventions pay off?

The government measures brought much-needed relief (albeit briefly) and the steady rise in edible oil prices was stemmed. Top companies operating in the edible oils segment such as Adani Wilmar (Fortune) and Marico (Saffola) slashed prices in the third quarter on the back of the government's steps.

Saugata Gupta, managing director and CEO, Marico, in January said the company dropped the price of edible oil under its brand Saffola in October and then took subsequent price cuts in December and January.

"Saffola will be competitive given that crude oil and vegetable oil might go up in the next two-three months," he had said while addressing an investor call after reporting third-quarter results. 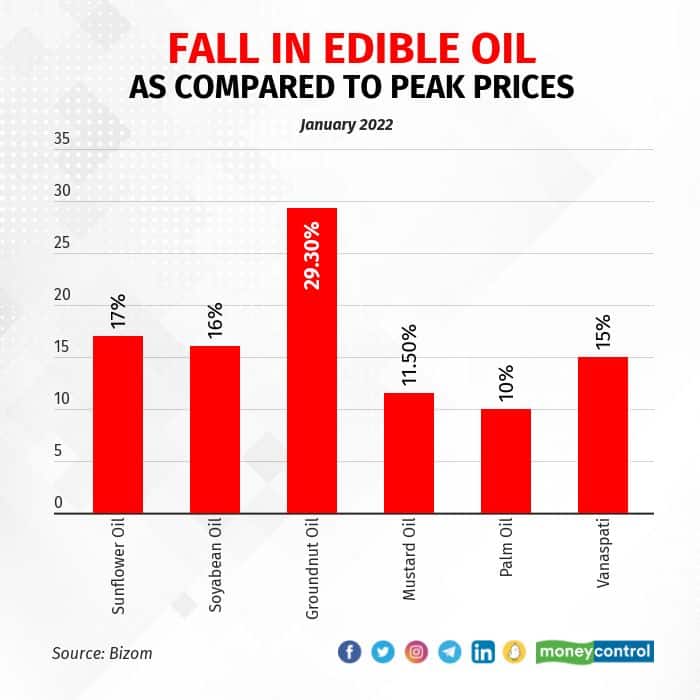 "After almost two years of heavy inflationary trend, we saw about 10-30 percent drop in prices in January across most cooking oils on the back of reduced import duties and easing of international prices," Akshay D'Souza, chief growth and insights officer at Bizom told Moneycontrol.

"The drop in input prices coupled with a reduction in import duties were passed on to consumers and end-consumer prices cooled off," he added.

"So far during fiscal 2022 (April to January), the average contribution of edibles oils' inflation to overall food inflation has been 1.3 percent. This is down from 3 percent in FY21 and is close the pre-pandemic average of 1.2 percent seen during FY17-FY20," said Dipti Deshpande, Principal Economist, Crisil.

However, despite the correction, the price of these commodities remained substantially higher than pre-COVID levels. Why are prices set to surge again?

While edible oil prices dropped briefly in December and January, the end of February is the 2021 story all over again. A likely all-out war between Russia and Ukraine, a move by the Indonesian government to restrict imports and lower production in Malaysia have led to a scarcity of the commodity in the global market once more.

According to Mehta, sunflower oil prices are set to surge again in the country given the ongoing tensions between Russia and Ukraine. "We import about 2.5 million tonnes of sunflower oil from these two nations and the crisis there will definitely have an impact on prices," said Mehta.

Indonesia, one of the largest exporters of palm oil to India, has asked its producers to sell 20 percent of their planned exports to the domestic market only, which is expected to lead to a supply shortage in the global market.

A rise in prices of crude oil is also linked to the price of edible oil. As crude oil prices climb, there is a push towards biofuels, which are produced using oilseeds, and a higher demand leads to a surge in their price too. Crude oil breached the $100 mark on Thursday due to the threat of a full-blown war between Russia and its neighbour Ukraine.

How will this affect FMCG companies and Indian consumers?

All these factors will impact the price of edible oil in the Indian market and, in turn, edible oil companies and hence Indian consumers.

According to Angshu Mallick, CEO, Adani Wilmar, though the company reduced prices in December and had planned a further cut in January, the company had to rethink its approach given the uncertain global environment.

"Our current strategy is to hold on to the prices and wait it out till the mustard crop harvest in March, which might offer relief," said Mallick.

The setback is going to be twofold for Indian consumers as on the one hand they will have to shell out more for buying edible oil, a daily essential, and on the other, the overall purchase basket would also see inflation as palm oil is a key ingredient for several FMCG products such as soap bars and skincare products.

Clearly, the FMCG industry, which has been grappling with inflation for several quarters now, too, is set for another challenging quarter.

"We remain cautious and selective within the sector due to an unfavourable medium-term risk-reward, given absolute growth has been modest relative to expectations and valuations," he added.

Why edible oil prices are set to surge again have 1623 words, post on www.moneycontrol.com at February 24, 2022. This is cached page on VietNam Breaking News. If you want remove this page, please contact us.