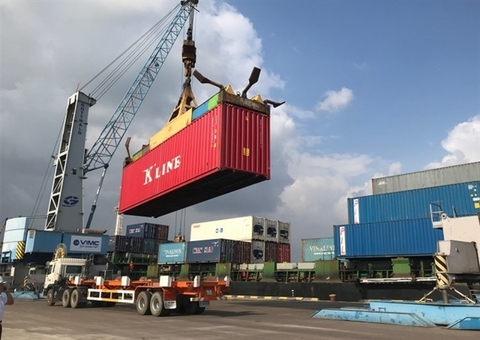 Freight rates soared in favour of VIMC last year, lifting the shipping giant out of indebtedness. VIMC finished the year with earnings of $165 million. — Photo vnexpress.net

Viet Nam Maritime Corporation (VIMC) had great performance in 2021, earning around VND3.75 trillion (US$165 million), according to Nguyen Canh Tinh, general director of the shipping giant.

Notably, its earnings took a steep turn for the better, soaring from a loss of VND145.3 billion ($6.4 million) in 2020 to a profit of trillions.

Tinh said the disruption of global supply chains due to COVID-19 had been pushing freight rates up significantly. VIMC has switched from domestic to international transportation in order to turn the rising freight rates to its advantage and succeeded.

"Profits did not come out of thin air but due to our anticipation of rising freight rates since early 2021. We have re-arranged all our shipping routes and had our freighters engaging in international transportation in order to take advantage of the situation,” Tinh explained.

Seaport exploitation continued to be VIMC's most profitable operation, contributing a lion's share of 78 per cent to total consolidated profit.

The general director also revealed that freight rates were quite low previously owing to a decade of depression.

It was the ongoing pandemic that has lifted transport costs up worldwide, especially on long routes. In 2022, freight rates are expected to rise at a slower pace but unlikely to drop to pre-pandemic levels.

VIMC records a profit of VND3.75 trillion in 2021 have 456 words, post on bizhub.vn at January 18, 2022. This is cached page on VietNam Breaking News. If you want remove this page, please contact us.