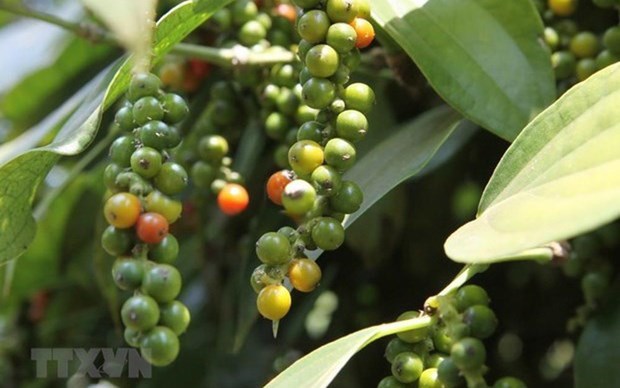 Hanoi (VNS/VNA) – The pepper export price is forecast to continue at a high level this year.

The Vietnam Pepper Association (VPA) reported that pepper was sold at 90,000 VND (3.98 USD) per kg last year on the domestic market, almost doubling the previous year's 48,000 VND, after a constant reduction over the last few years.

The average export price of Vietnam's pepper in December 2021 reached 4,703 USD per tonne, a sharp increase of almost 70 percent on the year 2020.

The association forecasts that Vietnam's pepper exports will rebound from the first quarter of 2022 with an estimated world purchasing demand of 130,000-160,000 tonnes, while the country's total annual output is only about 150,000 tonnes.

Moreover, the quality of local pepper is improving and the VPA is supporting local enterprises to promote the processing of pepper and branding.

According to the Ministry of Industry and Trade's Import-Export Department, this year the pepper export price is estimated to continue at a high level. The domestic pepper industry continues to develop traditional importing markets such as the US, EU, and the United Arab Emirates.

The US is the largest pepper importer of Vietnam, and the recovery of the economy will lead to an increase in pepper demand. Meanwhile, Vietnam's pepper has a competitive advantage compared to products of other countries such as Indonesia, India and China.

The export price is forecast to maintain a high level this year because there might be a shortage if the conditions for production are not favourable.

Vietnamese producers are likely to face a shortage in raw pepper for processing and export in 2022 due to global undersupply, according to a representative from the International Pepper Community (IPC).

Demand is bouncing back sharply around the world as restaurants and dining services are allowed to reopen.

Meanwhile, global output fell well short of the demand because, except for Brazil which is now in the middle of the harvest season, supply dried up for other major producers such as Indonesia and India.

Pepper output in Cambodian provinces bordering Vietnam can reach 30,000 tonnes per year. Even though the number only accounts for one-tenth of Vietnam's output, it can help ease the shortage.

To maintain the high export price of pepper in the next few years, many experts in the pepper industry believe that controlling the increase in supply is one of the key factors.

Farmers need to change toward clean and safe production and improve product quality. Brand building is also needed because Vietnam’s pepper has not been known in many markets although Vietnam is one of the largest exporters in the world.

According to Nguyen Qui Duong, deputy director of the Plant Protection Department, Vietnam's pepper industry now needs to switch from focusing on quantity to an increase in quality. It must reform the production system to have better quality pepper, helping farmers have a sustainable income.

According to Hai, the pepper industry must promote sustainable organic pepper growing areas, applying GlobalGAP and VietGAP standards in pepper production and processing.

At the same time, the enterprises must diversify processed pepper products with high quality, such as pepper oil, white pepper, red pepper, powdered pepper, seasoning products from pepper and organic pepper, to directly export to the global retail system.

Hoang Phuoc Binh, Chairman of the Chu Se Pepper Association, said to sustainably develop the pepper industry, the Government and concerned ministries and agencies must provide accurate, timely updates on areas growing the spice in Vietnam and the globe, and other information regarding processing, distribution and consumption.

In 2021, the structure of export pepper products had a significant change. Local enterprises reduced exports of raw pepper while increasing pre-processed or processed products, according to the VPA.

Vietnamese pepper products have continued a leading position in the global pepper industry with the export volume accounting for 60 percent of global consumer demand./.

Vietnam’s pepper exports forecast for growth this year have 746 words, post on en.vietnamplus.vn at January 28, 2022. This is cached page on VietNam Breaking News. If you want remove this page, please contact us.