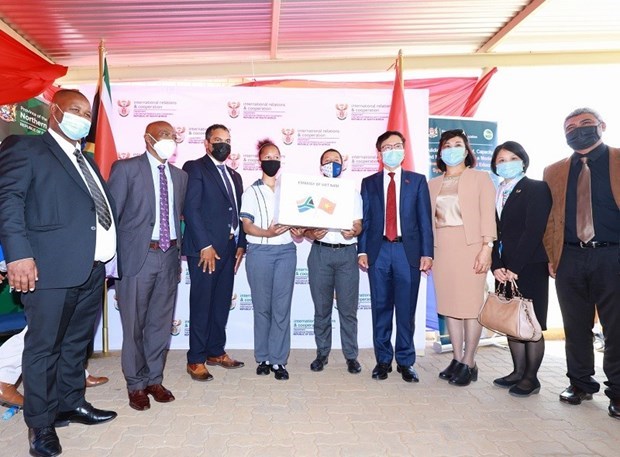 Ambassador Hoang Van Loi presented the Parkdene High School and the Tabatha Primary School in George each with 200,000 medical masks donated by the Vietnamese community in South Africa.(Photo: baoquocte.vn)

The trip was organised by South Africa's Department of International Relations and Cooperation.

Ambassador Loi used the occasion to learn about investment opportunities and experience in socio-economic development and tourism in seven districts of the GRDM.

GRDM Mayor Memory Booysen said the Garden Route is a well-known site to both domestic and international tourists, adding that tourism, agriculture, trade and finance contribute more than 60 percent of the region’s added value.

Briefing the mayor and other local leaders on Vietnam's politico-socio-economic achievements, Loi stressed that the fine political ties and potential and strength of each country have created favourable conditions for the two countries to boost their economic, trade, investment and tourism links in the time ahead.

Despite the COVID-19 pandemic, two-way trade has continuously increased, reaching nearly 1.4 billion USD last year, according to the ambassador.

Both sides are working to prepare for the fifth Vietnam-South Africa Inter-Governmental Partnership Forum, which is expected to create new momentum for the multi-faceted cooperation, both bilateral and multilateral.

On this occasion, the ambassador presented the Parkdene High School and the Tabatha Primary School in George each with 200,000 medical masks donated by the Vietnamese community in South Africa.

South African Deputy Minister of International Relations and Cooperation Alvin Botes spoke highly of contributions by the Vietnamese Embassy to the success of the working trip, which also saw the participation of the ambassador of the Republic of Korea (RoK).

He said the gifts from the Vietnamese Embassy are meaningful to local students and help the schools implement the South African Government's mandatory mask wearing rules at public places in the COVID-19 combat.

In an interview granted to the Vietnam News Agency (VNA), the Deputy Minister affirmed that South Africa attaches importance to promoting relations with countries in the southern hemisphere, including Vietnam – a special friend of South Africa.

Reiterating late President Nelson Mandela's statement that "Vietnam is a trustworthy partner of South African people", he said strengthening the bilateral relations across spheres is the consistent policy of the South African Government./.

Vietnam – trustworthy friend of South Africa have 539 words, post on en.vietnamplus.vn at January 21, 2022. This is cached page on VietNam Breaking News. If you want remove this page, please contact us.