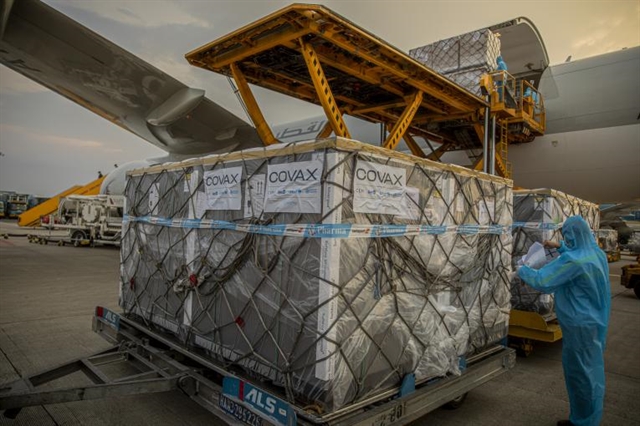 Việt Nam's openness to international aid, its transparency in COVID-19 data along with vaccination capacity have contributed to its success in acquiring COVID-19 vaccine doses amid global shortages and inequitable vaccine distribution, according to experts in international affairs and health.

The shipment of nearly 75 million doses to Việt Nam from various sources accounts for about 40 per cent of all vaccines in the country. This has helped the country ramp up its largest ever vaccination drive that later enables economic recovery from the pandemic.

"Việt Nam has been quite open in terms of receiving aid from many countries,” Senior Associate Professor Stephen R. Nagy at the International Christian University in Japan told Việt Nam News .

“As a result, it’s been able to acquire more vaccines for its people.

"That is really important. It has demonstrated an openness, where I think other countries have demonstrated a misplaced national pride, as opposed to getting the top grade vaccines, they have really focused on their domestic vaccines."

The vaccine has been considered a weapon in the COVID-19 armoury of Việt Nam besides other measures including targeted lockdowns, travel bans, quarantine and widespread testing, and social distancing. The increasing vaccination rate is the main driver that enables a shift from “Zero COVID” policy to flexible adaption to the pandemic.

It is a consistent policy of Việt Nam that vaccinations are provided free of charge for the entire population, including foreigners living and working in the country.

The country has set up a Government's working group led by Foreign Minister Bùi Thanh Sơn, which is tasked with acquiring as many vaccine doses as fast and quickly as possible. The body's main goals include urging manufacturers to deliver vaccines on schedule, seeking vaccine donations from foreign countries and the COVAX programme, and promoting the transfer of vaccine production technology. 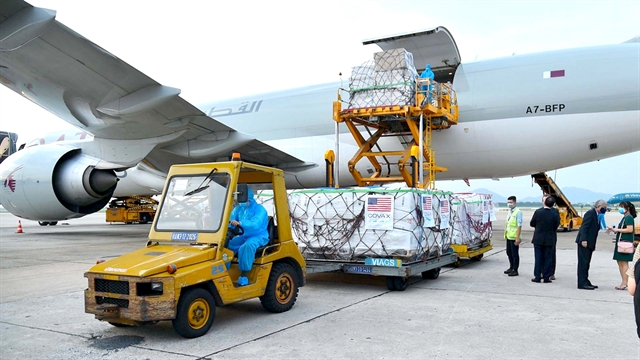 Vaccine doses donated through the COVAX Facility by the United States Government arrive in Việt Nam. — Photo courtesy of UNCEF in Việt Nam.

Dr Kidong Park, representative of the World Health Organization (WHO) in Việt Nam, said: "Việt Nam has implemented its vaccine diplomacy strategy at all levels through the whole-of-government approach engaging the Party, the Government, the National Assembly, all line ministries as well as embassies.”

According to the WHO in Việt Nam, as of 23 January, more than 195.8 million doses of COVID-19 vaccines have arrived in the country, of which more than 49.6 million are from COVAX, more than 24.8 million from countries’ donations, and more than 121.4 million from bilateral procurement.

The US, Germany, China and Japan are among the largest vaccine donors to Việt Nam, according to the statistics from the news site baochinhphu.vn (Government News).

"Việt Nam's release of timely data can instil confidence from the WHO and vaccine donor countries that it is being disbursed as quickly as the doses are received.

"The vaccine advocacy effort hinges on this transparency and in line with this is the Government's resolve and discipline to promote cooperation in vaccine production." 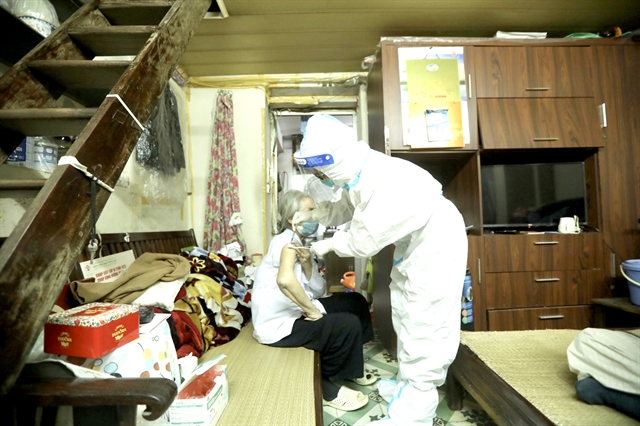 According to WHO in Việt Nam, the high vaccination capacity, efforts from all levels in implementing vaccine strategy and the effectiveness of grassroots healthcare are the main drivers for the successful vaccination campaign, which has inoculated about 75 per cent of the whole population.

Dr Park said the country's healthcare system has demonstrated "very high" vaccine absorption capacity with nearly one million doses per day in peak time while ensuring the safety of the vaccination campaign.

"No single dose was wasted. These increased the country's credit to donors," he added.

"Grassroots-level staff in healthcare and preventive medicine plays the most important role in delivering COVID-19 vaccines to people, particularly in hard-to-reach areas.

"They work tirelessly to go to every alley, knock at the door of each house, and check on every person to ensure that no unvaccinated person is left behind, particularly elderly people who can't go to immunisation sites."

As of January 25, Việt Nam has administered more than 178.8 million doses, of which nearly 74 million people have been fully inoculated and more than 25.9 million have got additional or booster doses. 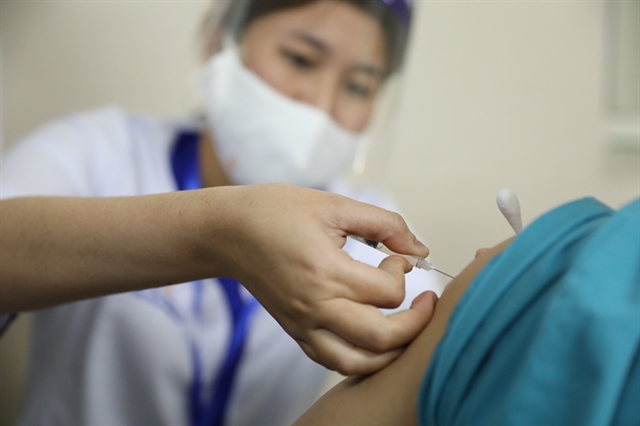 Vaccinations are provided free of charge for the entire population and for foreigners. — VNA/VNS Photo

Receiving a generous amount of vaccine donations from various sources, Việt Nam also has to make sure to balance the health of its citizens while maintaining autonomy, Professor Nagy said.

"Việt Nam is in a difficult neighbourhood. It has to make sure that it balances its political relations, its political interests, its economic interests, and the real security challenges that it is facing.”

"Many countries are facing a similar challenge of balancing their economic and political interests with their security imperatives."

Experts said the success in acquiring a large amount of donated vaccines is partly related to how other countries see the role of Việt Nam in the regional politics.

"The United States and Japan [among major vaccine donors] understand the importance of Việt Nam, of providing vaccines so that the Vietnamese economy can get back on line so that it can really quickly resume its role as, I think, one of the leaders of ASEAN.

"Việt Nam's success in acquiring about 75 million vaccines is partly related to how other countries understand the importance of Việt Nam in how the region’s politics are moving.”

“Việt Nam is fast becoming recognised as a middle power and has the capacity to build coalitions,” he said.

“In the nation's role as past Chair of ASEAN and its current seat at the UN Security Council, it's no wonder that the US and others, especially China, have been quick to distribute vaccine doses.

"This year the country is poised to gain international recognition as a peacebuilder in the contested region and will most certainly influence the regional security agenda.”

With the vaccination rate now surpassing the goal set by WHO, Việt Nam should take the opportunity to develop its soft power and through vaccine diplomacy to other developing countries, according to experts.

"Developing states like Việt Nam may be able to share some of its successful practices in terms of vaccinating its population, bringing in the vaccines from foreign countries that were donated by the United States or Japan," said Professor Nagy.

"They should also ensure that they had a pretty good education campaign to educate the Vietnamese citizens about the importance of vaccines.

"Those are lessons that neighbouring countries and other emerging states could learn from Việt Nam.” 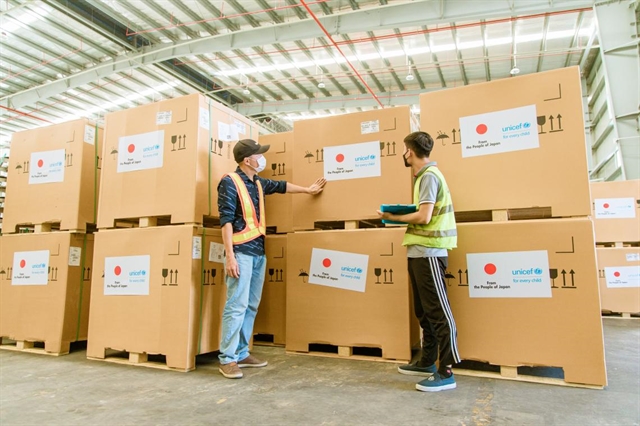 Việt Nam receives vaccine refrigerators funded by the Government of Japan and procured through UNICEF. — Photo courtesy of UNICEF

Other experts said Việt Nam can further develop its capacity to call for international science cooperation from past experience.

“Việt Nam's Ministry of Health had successfully established institutional capacity building," Borton said, noting that it was one of the first countries affected by the global severe acute respiratory syndrome (SARS) outbreak in 2003.

"This call for international science cooperation is an excellent model for ASEAN to follow during this new pandemic.”

Dr Park noted Việt Nam's support for other countries in the early period of COVID-19 pandemic which later helped Việt Nam when it was in the worst grip of COVID-19.

"Việt Nam helped other countries when they were in hard time,” he said.

“In the early period of COVID-19 pandemic, the country donated medical supplies to fellow countries to support their COVID-19 response.”

He also noted the country’s voluntary contributions to WHO's COVID-19 response fund as well as the COVAX.

"These fellow countries responded to Việt Nam's request through the vaccine diplomacy." — VNS

Việt Nam successful with vaccination drive, what's next? have 1637 words, post on vietnamnews.vn at January 28, 2022. This is cached page on VietNam Breaking News. If you want remove this page, please contact us.