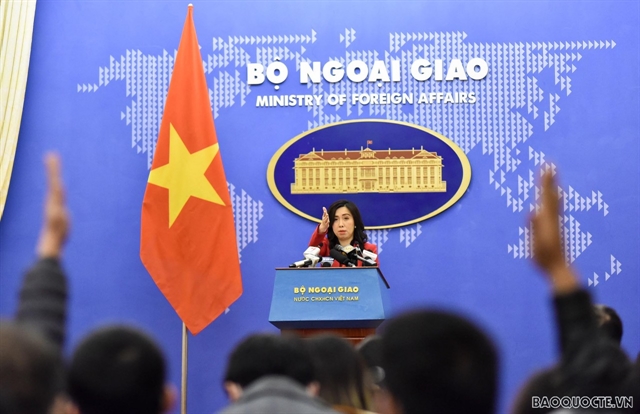 HÀ NỘI — Việt Nam "completely refutes" the claim that it deployed maritime militia on fishing vessels in the East Sea, spokesperson for the Ministry of Foreign Affairs Lê Thị Thu Hằng announced during a press briefing on Thursday in Hà Nội.

Responding to a question about China Daily's recent article stating that it suspected that Việt Nam deployed maritime militia on fishing vessels which could increase confrontation in the South China Sea (East Sea), the spokeswoman said: "This is a false claim and Việt Nam completely refutes this. Việt Nam follows a consistent policy of peace and self-defence."

"Actions taken by Vietnamese competent authorities strictly adhere to Vietnamese law and international law including the 1982 United Nations Convention on the Law of the Sea (UNCLOS).

"Việt Nam makes every effort to contribute to the maintenance of peace, stability, security, cooperation and development in the South China Sea in accordance with international law including 1982 UNCLOS. We call for all countries within and outside the region to make substantive and responsible contributions on this matter.” — VNS

Việt Nam refutes 'false' claim on militia deployment in East Sea have 314 words, post on vietnamnews.vn at January 20, 2022. This is cached page on VietNam Breaking News. If you want remove this page, please contact us.