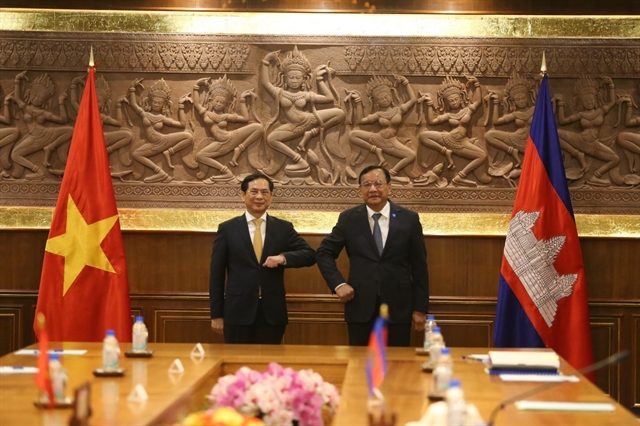 PHNOM PENH — Minister of Foreign Affairs Bùi Thanh Sơn on Thursday held talks with his Cambodian counterpart Prak Sakhonn during which both sides said they are happy to see the growing ties between the two countries.

Despite COVID-19, the bilateral trade surged nearly 80 per cent to reach US$10 billion last year.

In 2021, Vietnamese companies poured more than $88.9 million in four new projects in Cambodia.

This raised Việt Nam's total investment to over $2.84 billion, making it one of the five largest foreign investors in the neighbouring country.

The two FMs agreed to strengthen cooperation and enforce agreements reached by both countries' leaders on land border demarcation and marker planting.

Sơn also underscored the importance of maintaining peace, security and stability as well as freedom of navigation and aviation security in the region, saying that disputes must be settled via peaceful negotiations on the basis of international law and the 1982 UN Convention on the Law of the Sea.

It is necessary to push for talks to finalise a Code of Conduct in the South China Sea, he said. 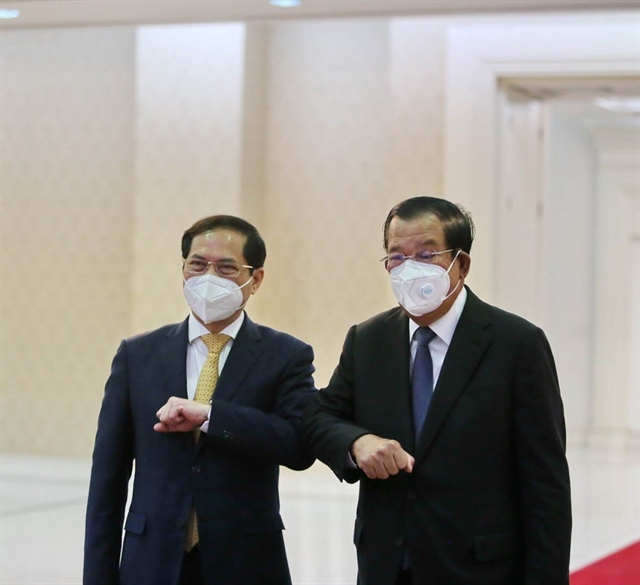 Welcoming Sơn on the first days of the Cambodia – Việt Nam Friendship Year 2022, PM Hun Sen expressed his delight at the positive and comprehensive development of the two countries' relations in all fields, from politics, security, defence to education-training, culture, science-technology, people-to-people exchange and cooperation between people living the shared border.

He also emphasised that the two foreign affairs ministers must coordinate well to organise celebrations of the friendship year and the 55th anniversary of the two countries' diplomatic ties.

Minister Sơn, for his part, reaffirmed Việt Nam supports Cambodia in its role as Chair of ASEAN in 2022 and stands ready to join Cambodia and other member states to accelerate the implementation of the bloc's agenda, particularly the five-point consensus on Myanmar.

He conveyed greetings and reiterated the invitations of Prime Minister Phạm Minh Chính and other Vietnamese leaders to PM Hun Sen to visit Việt Nam in 2022.

Sơn is on a January 19-20 visit to Cambodia at the invitation of Cambodian Deputy Prime Minister and Foreign Minister Prak Sokhonn. — VNS

Việt Nam, Cambodia enjoy thriving ties: Foreign Ministers have 538 words, post on vietnamnews.vn at January 21, 2022. This is cached page on VietNam Breaking News. If you want remove this page, please contact us.