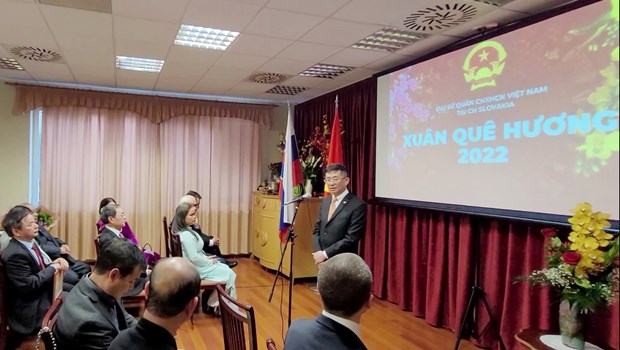 A Tet get-together is held by the Embassy of Vietnam in Slovakia for Vietnamese expats on January 22. (Photo: VNA)

Hanoi (VNA) – Vietnamese embassies have been busy organising celebrations of traditional New Year – Tet – for Vietnamese expats across the world.

On January 22, the Embassy in Kuala Lumpur hosted a gathering for Vietnamese people living in Malaysia , during which Ambassador Tran Viet Thai extended Tet greetings to the Vietnamese community.

He praised outstanding Vietnamese role models who have made great contributions to the community last year.

In a similar event in Algiers, Ambassador Nguyen Thanh Vinh said overseas Vietnamese people remain an inseparable part of the country. He highly spoke of the Vietnamese expats' contributions to the homeland and valued their mutual support for each other during the pandemic.

Another get-together was held by the Embassy of Vietnam in Slovakia in the capital city of Bratislava on the same day, which gathered a large number of Vietnamese expats and associations in the European country.

In his opening remarks, Ambassador Nguyen Tuan thanked the Vietnamese community for helping reinforcing the friendship between the two countries and developing Vietnam.

Meanwhile, Ambassador to the UK Nguyen Hoang Long attended a warm Tet gathering held for the first time by the Vietnamese Society in Oxford, bringing together Vietnamese students and PhD candidates as well as professors and lecturers from the University of Oxford.

Long said he expects the partnership in education and training between Vietnam and the University of Oxford will grow further, particularly in research./.

Tet celebrations hosted for Vietnamese people worldwide have 338 words, post on en.vietnamplus.vn at January 23, 2022. This is cached page on VietNam Breaking News. If you want remove this page, please contact us.