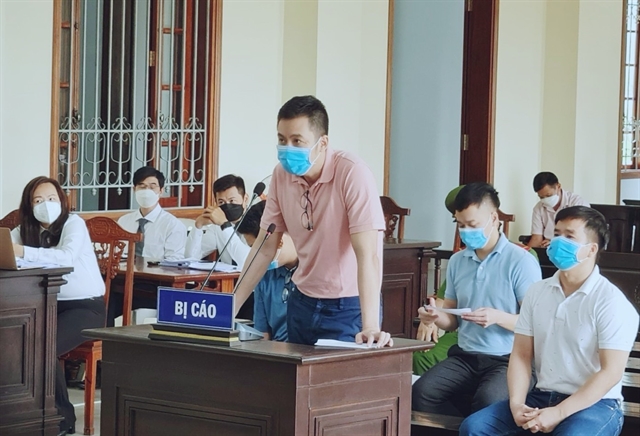 The defendants at the court. — VNA/VNS Photo

CẦN THƠ — The People's Court of Cần Thơ City on Thursday upheld the prison sentences for Trương Châu Hữu Danh and other members of the " Báo Sạch " (Clean journalism) group.

The five defendants were found guilty of "abusing the rights to freedom and democracy to violate the interests of the State, the rights and legitimate interests of organisations and individuals" under Clause 2 of Article 331 of the 2015 Penal Code (revised and supplemented in 2017).

They were also banned from journalism for three years after their jail terms finish.

According to the jury, the defendants posted many articles on a Facebook fan page named " Báo Sạch " and " Làm Báo Sạch " (Doing clean journalism), a YouTube channel named "BS Channel," and their personal Facebook pages with content causing "non-material" damage, affecting the prestige and honour of organisations and individuals assigned with management tasks, and undermining people's trust in the Party and State.

The jury concluded they worked in journalism but took advantage of the job to commit wrongdoings, so the additional penalty of prohibiting them from journalism practice does not run counter to legal regulations. — VNS

Penalties upheld for members of ‘Báo sạch’ group have 435 words, post on vietnamnews.vn at January 28, 2022. This is cached page on VietNam Breaking News. If you want remove this page, please contact us.