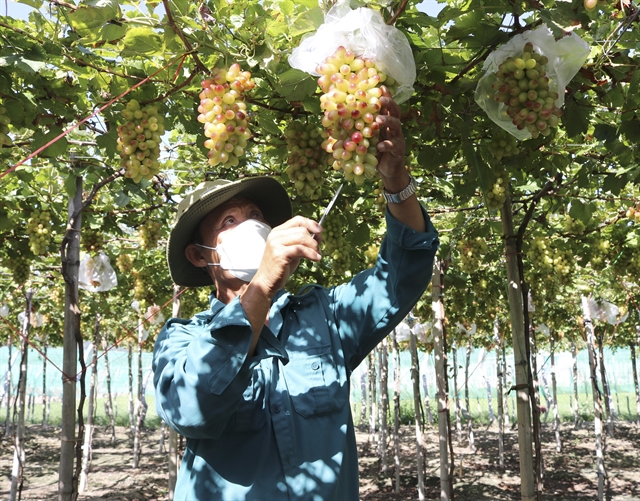 NINH THUẬN — Farmers in the south-central province of Ninh Thuận are getting high profits for grapes they are harvesting for Tết (Lunar New Year) as demand is exceeding supply.

The country's largest grape producing province has more than 1,200ha under the fruit.

Ngô Khắc Sơn, who has a Red Cardinal grape orchard in Ninh Hải District's Vĩnh Hải Commune, said prices have shot up in recent weeks with traders paying VNĐ35,000 – 40,000 (US$1.3 – 1.8) a kilogramme for the fruit, two to three times the price in the middle of last year.

He hopes to harvest nearly three tonnes from his 1,300sq.m orchard for Tết , he said.

He sells also to tourists who visit his orchard.

Many farmers allow tourists into their orchards and sell directly to them.

They grow mostly three varieties of grapes, including Red cardinal, NH 01 – 48 and NH 01 – 152, and have three main harvest seasons in a year, including during Tết .

In the districts of Ninh Hải and Ninh Phước and Phan Rang – Tháp Chàm City, they are busy harvesting to sell before Tết and are getting yields of one to three tonnes per 1,000sq.m.

Nguyễn Khắc Phòng, director of the Thái An General Agriculture Service Co-operative in Ninh Hải District's Vĩnh Hải Commune, said at the end of 2021 there were rains and floods which affected cultivation and harvest.

Thái An is co-operating with farmers to grow 150ha of grapes, but only 20ha are ready for harvesting now and the rest would have to wait until after Tết , causing a decline in supply.

In recent years, farmers, co-operatives and companies in the province have started to produce various products from grape such as wine, syrup, juice and raisin.

The province plans to expand the area under the fruit to 1,365ha by the end of this year and achieve an annual output of 33,800 tonnes, according to its Department of Agriculture and Rural Development.

It is also expanding the cultivation of the fruit under Vietnamese good agricultural practices (VietGAP) standards.

It is encouraging farmers to pool their lands through co-operatives and co-operative groups to increase production efficiency and incomes. — VNS

Ninh Thuận farmers harvest grapes for Tết, get high prices have 552 words, post on vietnamnews.vn at January 22, 2022. This is cached page on VietNam Breaking News. If you want remove this page, please contact us.