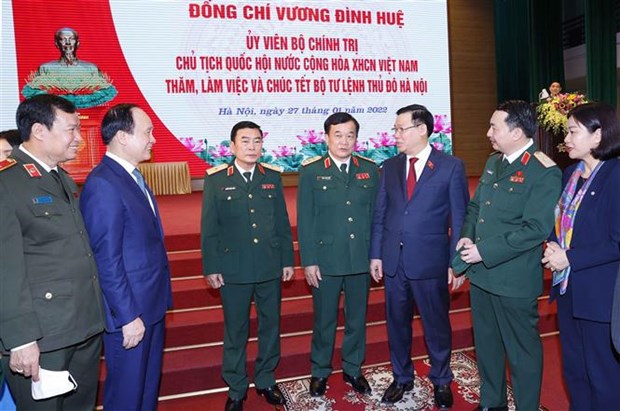 During the visits, Hue extended his best New Year wishes to all officers and soldiers of the Hanoi Capital High Command and the Mobile Police High Command.

The NA Chairman hailed their contributions to the protection of the capital city and the country at large as well as to the fight against the COVID-19 pandemic last year.

He noted that 2022 is a year of great significance, and a pivotal year in implementing the Resolution of the 13th National Party Congress. The COVID-19 pandemic may continue developing complicatedly and unpredictably, he said, adding that strategic competition between world powers become fiercer, while traditional and non-traditional security issues has been on the rise.

The political security situation in Hanoi and the whole country also has latent factors that can cause instability. Therefore, the task of defending the country and the capital city will have new and higher requirements, Hue said.

Accordingly, the leader asked the Hanoi Capital High Command to maintain its role as the core force in building the all-people national defence and the all-people defence posture; focus on building the force in the lean, compact, strong, mobile, regular and modern direction; and form a strong and widespread reserve force, so as to firmly safeguard the capital city in all situations.

The NA Chairman also stressed the need to build a mobile police force that is really transparent, strong, regular, elite and modern to meet the requirements of tasks in the new situation.