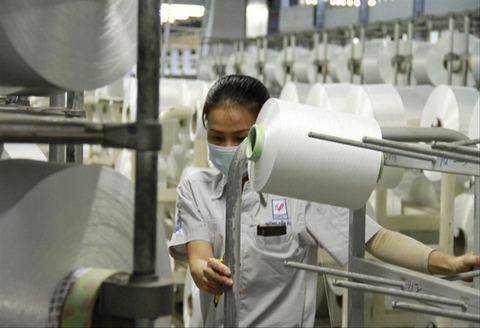 A worker works on a VNPOLY’s production line. As Dinh Vu polyester plant has begun to pick up steam, it doesn’t need stakeholders financial support any longer. — Photo tienphong.vn

Thanks to a scheme for state-owned enterprise (SOEs) restructuring during 2016-2020, many unprofitable plants have been reinvigorated, according to reports.

Viet Nam Oil and Gas Group (PVN) revealed that in 2021 four of its plants were taken off the list of 12 large-scale lossmaking plants in the industrial and commercial sector.

Dinh Vu polyester came into operation in May 2014 but frequently ran at a loss as its revenues were dwarfed by operation costs. The plant accordingly had to cease operation in September 2015.

VNPOLY reported that the company had up to 27 production lines operating in 2021 with a total capacity of 10,700 tons of yarn per year. Its yarn carved out a niche in the international market and received orders from such leading brands as Adidas and Target.

"Earnings before fixed charges were estimated at VND16 billion (US$704,691). In 2021, VNPOLY successfully renewed nine out of 11 contracts with Vinatex's agencies and became an agent of several major fibre manufacturers including Xiangly and Hengyi," said a VNPOLY representative.

As the plant has begun to pick up steam, VNPOLY now can stand on its own feet and no longer need stakeholder financial support, the representative added.

Dung Quat bioethanol began production in February 2012. As ethanol market prices were normally lower than the plant's costs, it was unable to break even and it had to close down in April 2015.

In October 2018, the plant was brought back to life and won its first contract with Sai Gon Sundries Investment and Trading JSC to produce 42,000 cubic metres of ethanol.

DAP-1 Hai Phong under DAP VINACHEM JSC was another plant that did quite well last year.

DAP-1 Hai Phong produced its first fertiliser batch in April 2009. It made the first loss of VND461.8 billion ($20.4 million) in 2016 and found itself among the 12 ailing plants of the industrial and commercial sectors.

After restructuring, the plant began to operate profitably and had its name removed from the list. By late Q3 2021, its earnings hit around VND158 billion ($7 million), 232 per cent higher than the full-year target. Eleven-month output reached 239,362 tons, up 31 per cent compared to 2020.

It is also worth noting that the Government has urged agencies to clear all the backlogs to have Thai Binh 2 thermal plant connected to the national power grid in 2022.

Thai Binh 2 is an unfinished billion-dollar project that incurs a daily expense of billions of dong to the State Budget to service its debts. The project began construction in March 2011 but was unable to finish after ten years. Its financial burden caused public dismay.

Deputy Prime Minister Le Van Thanh carried out on-ground inspections of the project last year and requested workers to complete the remaining work. People had to work in a rush to finish the project on time. Thanks to their efforts, everything went according to plan.

"Generator Number 1 will connect to the power grid on May 19, 2022. Coal combustion starts on June 16 and power generation in Number 1 begins on November 30. Generator Number 2 follows suit on December 31," said the manager in charge of the project.

Currently, the overall project is 87 per cent complete, construction 85 per cent and design 100 per cent. The number of workers employed on the ground stays at 459, the manager added.

Thai Binh 2 power plant is expected to add 1,200 megawatts of power to the national grid. — VNS

Lossmaking plants to afloat thanks to Government scheme have 737 words, post on bizhub.vn at January 24, 2022. This is cached page on VietNam Breaking News. If you want remove this page, please contact us.