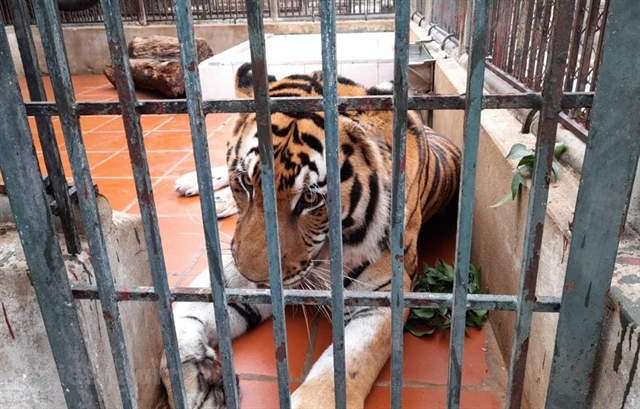 The wild tiger population has decreased significantly in Việt Nam and around the world over the past 30 years. —Photo for illustration Vietnamplus.vn

HÀ NỘI — The Education for Nature Vietnam (ENV) on Monday organised a seminar on raising tigers for conservation efforts in Việt Nam.

Bùi Thị Hà, ENV deputy director, said that the wild tiger population had decreased significantly in Việt Nam and around the world over the past 30 years. Meanwhile, the breeding of tigers for “non-commercial” purposes by individuals and businesses in Việt Nam was growing strongly with the number of registered captive tigers increasing.

In the near future, State agencies would conduct surveys and make records of all tigers being raised in Việt Nam and set up a national database to manage tigers being kept in captivity under the National Programme on Tiger Conservation, she said.

Hà said it needed to be carried out at the same time as measures to ensure the tiger conservation goal of Việt Nam and the world.

According to the World Wildlife Fund, there were fewer than five tigers left in the wild in Việt Nam in 2016. The International Union for Conservation of Nature and Natural Resources also said that there were no signs of wild tigers in the country and there had been no further survey of the tiger in Việt Nam since 2009.

Although there is no official statement, many people have suggested the tigers may have become extinct in Việt Nam.

Participants at the seminar proposed the Government and agencies complete legal provisions to tighten the management of tiger farming in the country.

In the immediate future, it is necessary to issue a policy on breeding tigers, including a regulation on birth control to ensure that the tiger population is maintained at a level that supports conservation efforts, according to the participants. Monitoring should also be developed to prevent facilities from trading wildlife illegally.

The participants underlined the need to devise a separate legal document to control the operation of non-commercial wildlife farms, including those raising tigers as the foundation for the operation of legal establishments in the long term. — VNS

Legal foundations sought for tiger conservation in Việt Nam have 483 words, post on vietnamnews.vn at January 18, 2022. This is cached page on VietNam Breaking News. If you want remove this page, please contact us.