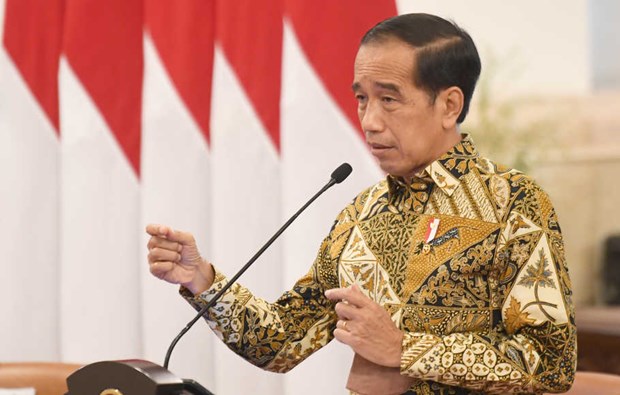 Jakarta (VNA) – Indonesia's ongoing transformations, including the switch to value-added economic activities, green energy development, and the digital economy, must continue despite the adverse impacts of COVID-19, Indonesian President Joko Widodo has said.

He made the call during a celebration of the 67th founding anniversary of Parahyangan Catholic University, in Bandung, West Java, on January 17.

The export of raw goods do not provide optimal benefits to Indonesia because they do not produce an economic multiplier effect for the community and the country, he explained.

Indonesia will stop bauxite exports this year, he announced, adding that the country will also cease shipments of copper raw materials in the following one.

Another sector of transformation is green economy development. The global market, in the next few years, will only be interested in products made by the green industry, Widodo added.

The third field is the development of the digital economy.

Indonesia has great potential in the digital sector, and its digital market is growing rapidly compared to other ASEAN countries, the Indonesian President said.

In 2025, the value of Indonesia's digital economy is projected to hit 146 billion USD./.

Indonesia’s transformations must continue: President have 305 words, post on en.vietnamplus.vn at January 18, 2022. This is cached page on VietNam Breaking News. If you want remove this page, please contact us.