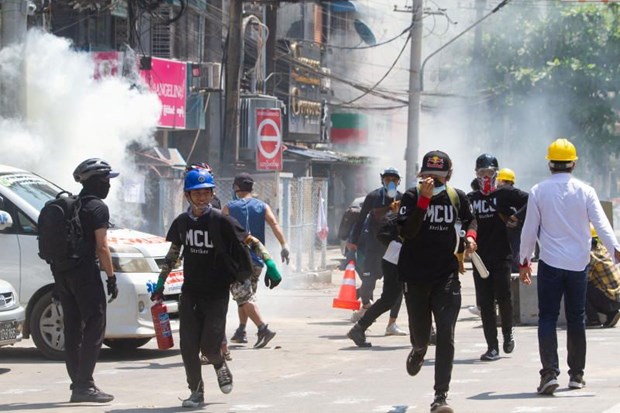 Tear gas and fire extinguisher gas float around demonstrators as they run away from police during a protest against the military coup in Yangon, Myanmar, on March 8, 2021. (Photo: Reuters)

The Indonesian foreign ministry said on January 22 that during the phone call on January 21, which was intended to update on the results of PM Hun Sen's visit to Myanmar, the Indonesian leader emphasised that ASEAN's approach towards Myanmar should be based on agreed principles, particularly the Five-Point Consensus.

The Myanmar military must provide access for the ASEAN Chair's Special Envoy to be able to immediately communicate with all concerned parties in Myanmar, he said, noting that this communication is essential to pave the way for an inclusive national dialogue.

He agreed to the proposal to establish a Consultative Meeting, consisting of the Special Envoy and the ASEAN Secretary General, the AHA Centre, the Myanmar authorities, as well as UN agencies to provide support for the distribution of humanitarian aid without discrimination./.

Indonesian President affirms importance of ASEAN five-point consensus on Myanmar have 354 words, post on en.vietnamplus.vn at January 24, 2022. This is cached page on VietNam Breaking News. If you want remove this page, please contact us.