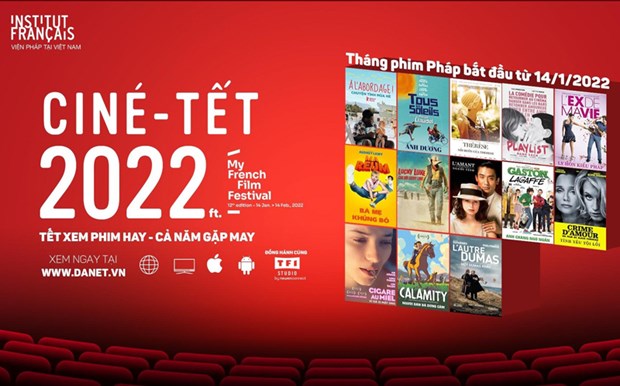 Hanoi (VNA) – Thirteen French famous films are set to be screened free of charge via DANET, an online movie platform, during an event called "CINE-TET 2022 avec MyFFF!" from January 14 to February 14.

The French film month will be held by the French Institute in Vietnam (L’Espace) in coordination with BHD Company.

This is the third consecutive year the event of this kind has been organised to introduce French movies to Vietnamese audiences. The two first events attracted over 1 million views.

The movies on offer include L'amant (Lover), which was filmed in Vietnam in 1986, Lucky Luke, Tous Les Soleils, Ex De Ma Vie (L'), Gaston Lagaffe, and Cigare Au Miel. These movies are selected from MyFFF (My French Film Festival) – an annual film festival in France.

Eight other movies copyrighted by DANET will also be introduced to the audiences from January 22./.

French films to be screened online free during Tet holiday have 263 words, post on en.vietnamplus.vn at January 14, 2022. This is cached page on VietNam Breaking News. If you want remove this page, please contact us.