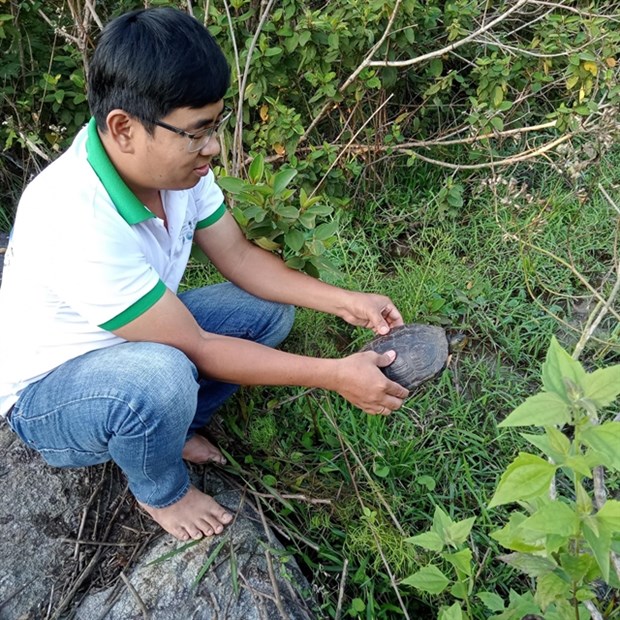 Quang Nam (VNS/VNA) – The Cham Island's Marine Protected Area (MPA) management board and Quang Nam province's rangers have released an endangered turtle to the local forest, three days after it was captured by a local farmer and handed to the MPA.

Huynh Thuy Huong, an MPA communication employee, told Vietnam News that the Chinese strip-neck turtle (Mauremys sinensis) was found by Truong Cong Tanh at a paddy field in Dien Ban town in central Quang Nam province on January 14, who gave the turtle to the MPA.

The 1.5kg, 24cm shell turtle, which is listed in the International Union for Conservation of Nature as a critically endangered species, was returned to the wild on January 20.

According to MPA, seven tortoises and sea turtles, handed in by locals, have been released in the Cham Islands in 2021.

The Cham Islands-Hoi An (including the total area of the Islands' land and water and Hoi An) was recognised as a World Biosphere Reserve in 2009. It is home to a large population of sea turtles and tortoises.

The MPA also reported that nearly 1,000 baby turtles had been released into the ocean in 2017-19 since the ex-situ hatching (moving turtle eggs to another place for hatching) conservation project was launched in 2017.

The Cham Islands is the only successful site for the ex-situ turtle eggs hatching project in central Vietnam./.

Endangered turtles returned to the wild have 374 words, post on en.vietnamplus.vn at January 21, 2022. This is cached page on VietNam Breaking News. If you want remove this page, please contact us.