Children of Vietnamese people in Ukraine at a Vietnamese language class (Photo: VNA)

Moscow (VNA) – The Vietnamese Embassy in Ukraine has been keeping a close watch on the current situation and maintaining attention to the Vietnamese community here, Ambassador Nguyen Hong Thach said on January 27.

Granting an online interview to the Vietnam News Agency, he said amid contradictory information about the situation in eastern Ukraine, the embassy has still maintained frequent contact, either in person or online, with most of the Vietnamese community across Ukraine, except for those in Donetsk that it hasn't gained access to.

There haven't been any worrying signs in Ukraine, and economic activities can still take place as normal, Thach said, noting that the embassy has still organised many activities marking the 30th anniversary of the two countries' diplomatic relations.

The ambassador appealed to the Vietnamese community in Ukraine not to be overanxious but stay calm to sustain economic activities for the sake of themselves. 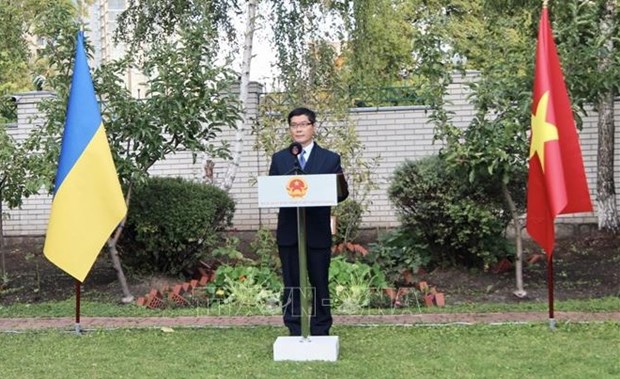 Regarding the Ukraine situation, he cited the Ukrainian Ministry of Foreign Affairs as saying that the situation is not really tense like what some western media agencies reported, and that some countries' withdrawal of their diplomatic staff is too circumspect.

Thach stressed the Vietnamese Embassy is keeping a "very close" watch and perceives that the situation is not too tense to lead to a war, the relevant countries are working towards negotiations, and every diplomatic effort is still being made through meetings and contacts among diplomats such as the recent meeting in Geneva.

The embassy made this assessment, through frequent contacts with diplomats of other countries, with all of its sense of responsibility towards the homeland and the Vietnamese community in Ukraine, he added./.

Embassy maintaining attention to Vietnamese in Ukraine: ambassador have 346 words, post on en.vietnamplus.vn at January 27, 2022. This is cached page on VietNam Breaking News. If you want remove this page, please contact us.