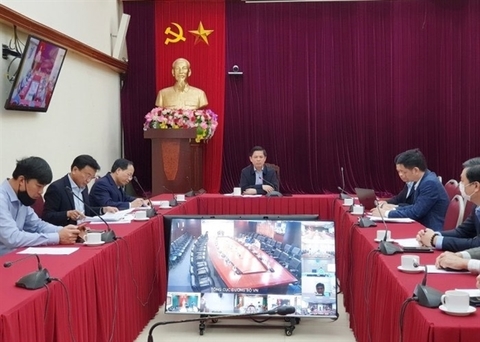 Minister of Transport Nguyen Van The chaired a meeting on transport construction and disbursement on 25 January. — Photo bnews.vn

There is just one week left until the deadline for project management boards to step up disbursement to reach 96 per cent at the Ministry of Transport, Minister Nguyen Van The said on Tuesday.

The said the disbursement was moving at below-average on several projects.

Many agencies spend just four in every five dollars that are pledged for spending. They keep one dollar on hold, bide their time and request project adjustment when deadlines are close, unnecessarily dragging out projects.

Lang Son Province's Municipal Department of Transport has registered an investment scheme of VND83 billion (US$3.67 million) but has disbursed just 32 per cent of the registered money. They are requesting an adjustment for the National Highway 4A Project.

In such cases, the ministry is going to reject their request and urge local authorities to reprimand agencies that have prolonged disbursement to the detriment of the ministry's target, according to the minister.

"When disbursement suffers a setback, it is all about looking at ways to overcome the setback, not taking the easy way out by requesting project adjustment," The said.

The amount of money to disburse in 2022 will be larger than in 2021, staying at around VND50 trillion ($2.2 billion), but with additional money from the programme for socio-economic recovery and development.

Given such a huge workload ahead, the minister called on project management boards and agencies to make payments at a faster pace right from January and February to get the year off to a good start.

Regarding projects in Group A, which are subject to the approval of the Prime Minister, agencies must spare no effort to have them completed on time.

For seven projects in Group B and C, which have yet to receive approval, agencies must complete documents faster to the ministry for approval.

43 projects which have been given the green light from the ministry must quickly begin and accelerate disbursement.

Any project management board that has a low disbursement rate in February will be given a warning or face a penalty, warned the ministry's leader.

Nguyen Danh Huy, director of the ministry's Department of Planning and Investment, said that about VND43 trillion ($1.9 billion) was expected to be disbursed in 2021 under the public investment plan.

Several projects met their disbursement target for 2021, while others are in a rush to clear before January 31, the director reported.

In provinces, 23 out of 32 municipal agencies have managed to disburse money according to plan, the rest are falling short of the target.

Bui Quang Thai, director of the ministry's Transport Engineering Construction and Quality Management Bureau, noted that 13 projects had missed the mark by January.

These projects include the Vinh Hao-Phan Thiet Section of North-South Expressway (80.2 per cent), the 24-TP2 Highway Project (74.2 per cent) and the Project on Traffic Connection in the Central Highlands (52.4 per cent). — VNS

Disbursement must speed up: minister have 632 words, post on bizhub.vn at January 26, 2022. This is cached page on VietNam Breaking News. If you want remove this page, please contact us.