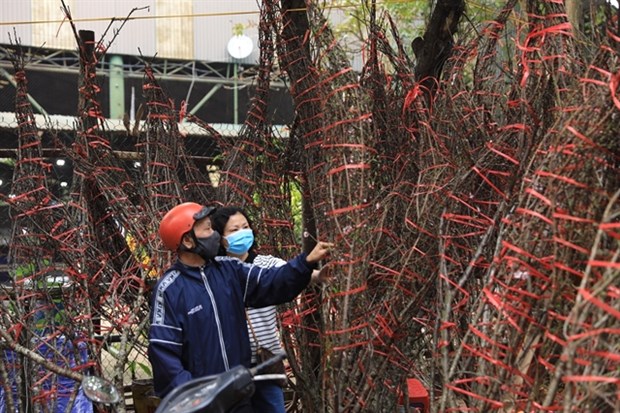 Local people at a flower market as temperatures drop in Hanoi on January 24. (Photo: VNA)

Hanoi (VNS/VNA) – A cold spell combined with a strong north-east monsoon is forecast to cause temperatures in the northern region to drop sharply, with frost in mountainous areas between January 28 and February 3, coinciding with Tet (Lunar New Year) holidays.

The National Centre for Hydro-Meteorological Forecast ing on January 25 warned that the temperature is predicted to fall to 10-14 degrees Celsius in the northern delta provinces and 7-10 degree Celsius in northern mountainous areas from January 29.

The northern region is also forecast to see showers, thunderstorms, hail and strong winds between January 28 and February 3, the centre said.

Temperature s in provinces from Thanh Hoa to Thua Thien-Hue are expected to be 13-23 degrees Celsius between January 29 and February 2.

The provinces are also forecast to see showers during this time, the centre said.

The temperatures in localities from Da Nang to Binh Thuan provinces are predicted to be 19-30 degrees Celsius between January 30 and February 3. Sunny weather is forecast in these localities.

The southern region will experience sunny days from February 1-6 with temperatures of 21-33 degrees Celsius, the centre added.

The centre also warned that a tropical low-pressure system south of the Philippines will enter the southern part of the East Sea and is likely to gain strength on February 2 or 3.

In response to the situation, the National Steering Committee for Natural Disaster Prevention and Control has ordered all relevant provinces and cities to closely monitor the weather's developments to guide local people and prevent damage from severe cold weather, frost, heavy rain and thunderstorms during the Tet holiday.

The provinces and cities are told to make plans to respond to the situation, especially preparing equipment and materials as well as rescue forces that stand ready to help local people overcome the consequences quickly and effectively, the committee said.

Localities are assigned to work with relevant agencies and local media outlets to provide local people with information so they can cope with the cold weather, such as reinforcing their roofs and protecting household items, vegetables, crops, and livestock in accordance with specific local conditions to minimise damage.

Coastal localities from Quang Ninh to Kien Giang have to inform offshore vessels about the weather developments so that they could have appropriate plans to cope with incidents, the committee said./.

Cold spell to cause temperatures to drop, frost in North during Tet have 572 words, post on en.vietnamplus.vn at January 26, 2022. This is cached page on VietNam Breaking News. If you want remove this page, please contact us.