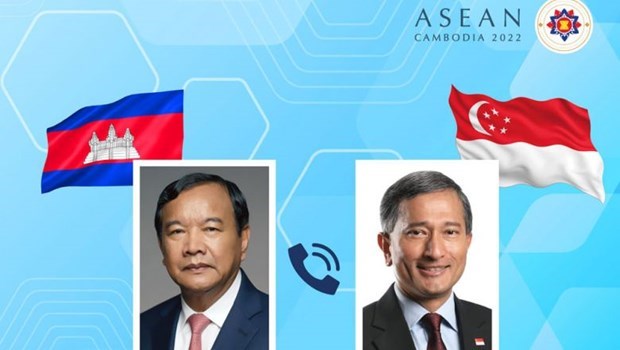 The Cambodian foreign ministry said in a press statement on January 18 that during a telephone conversation on January 13, both ministers reaffirmed their commitment to work together in strengthening ASEAN centrality, unity and resilience while addressing common challenges and shared goals, thereby enhancing peace, stability, and prosperity in the region and beyond.

Sokhonn briefed Balakrishnan on the outcomes of the recent visit by Cambodian Prime Minister Samdech Techo Hun Sen to Myanmar, the press statement said, noting that the visit represented an important step to pave the way for an inclusive dialogue among all parties concerned on the Myanmar issue.

The statement said the two ministers looked forward to the convening of the ASEAN Foreign Ministers’ Retreat, which will be the first major meeting among the 10 member states under Cambodia’s ASEAN Chairmanship for 2022.

Cambodia, Singapore vow to strengthen ASEAN's centrality have 307 words, post on en.vietnamplus.vn at January 18, 2022. This is cached page on VietNam Breaking News. If you want remove this page, please contact us.