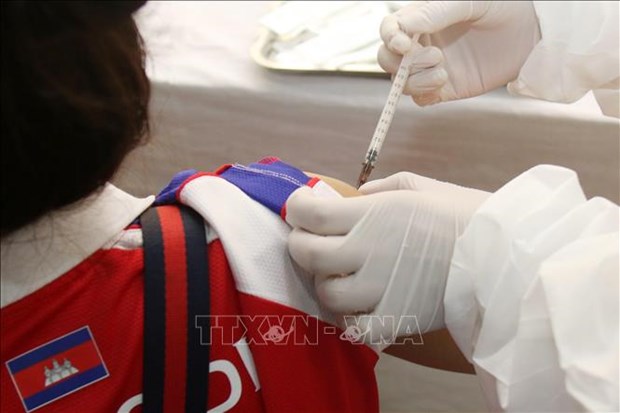 Hanoi (VNA) – Cambodia on January 14 began administering the fourth dose of COVID-19 vaccine to priority groups in its capital city of Phnom Penh amid the spread of the Omicron variant within the community.

The priority groups include those working on the frontline of the pandemic combat, the army and police forces, the elderly and high-ranking officials, the Cambodian health ministry said.

Prime Minister Samdech Techo Hun Sen took his fourth jab at his residence in southern Takhmao city and urged people to get their shots when their turns come.

There is no better choice than vaccination, along with the three dos and three don’ts health measure, he said.

The three dos include wearing a face mask, washing hands frequently and maintaining the physical distancing of 1.5 meters, while the three don’ts are avoiding confined and enclosed spaces, avoiding crowded spaces, and avoiding touching each other.

Since the pandemic began, Cambodia has recorded a total of 120,728 cases, with 3,015 deaths and 117,072 recoveries, the ministry said.
Cambodia has reopened socio-economic activities in all areas since November, buoyed by its high vaccination rates.

The country has so far administered at least one dose of the COVID-19 vaccine to 14.3 million people, or 89.4 percent of its 16 million population, the ministry said.

Cambodia rolls out 4th dose of COVID-19 vaccines have 420 words, post on en.vietnamplus.vn at January 14, 2022. This is cached page on VietNam Breaking News. If you want remove this page, please contact us.