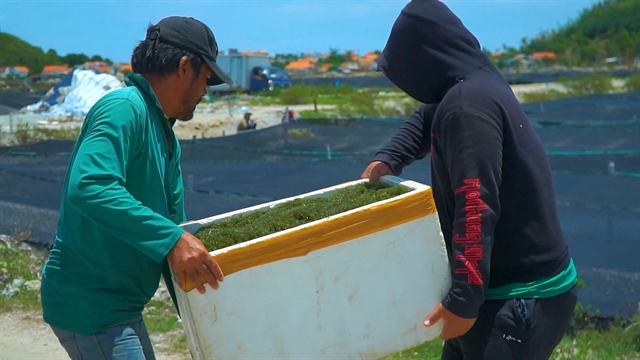 Trần Như Hoàng, a resident of Ninh Hải Commune in Ninh Hòa Township meticulously takes care of sea grapes at his farm in the central coastal province of Khánh Hòa.

He has grown sea grapes for many years and now enjoys a decent income from them.

"I don't have to worry about the market for this because the demand is great. Growing sea grapes is more stable than other fishery products," he said.

Each year, he earns a profit of VNĐ350 million from his 3ha farm.

The money gained may not be as high as growing snails or lobsters but the demand is stable and it doesn't depend on the overseas market like other fishery products.

About 40km away, local employees are busy harvesting seaweed in the vast farm of Nguyễn Quang Duy in Vĩnh Lương Commune in Nha Trang City of the same province.

Visiting the seaweed processing and packing facility of Duy, one might be overwhelmed by the scale of production. At the farming area, dozens of workers each carry out their own tasks from taking care of to picking up seaweed for preliminary processing.

Duy said this is the place where they work on the last step in the process of producing sea grapes that meet standards for being exported to major markets including Japan and the US.

He has nearly 100ha sea grapes-growing farms in Khánh Hòa and other localities like Phú Yên and Ninh Thuận provinces.

He started to cultivate seaweed on a 3ha farm in 2010. He said the sea grapes, known as umibudou in Japan and green caviar in England, were first introduced from Japan to Việt Nam in 2004. 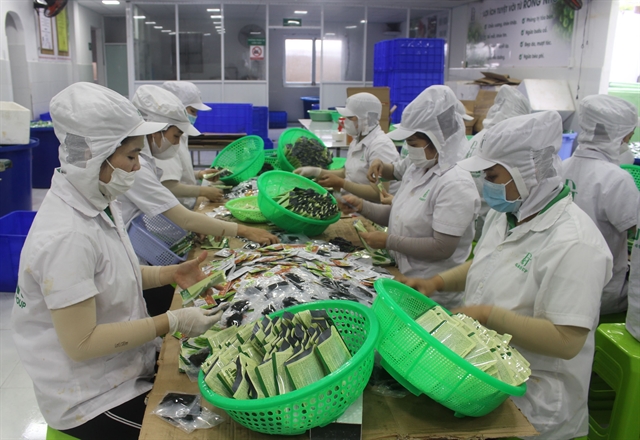 Green caviar is a type of green algae that grows in a saltwater environment, either natural or cultured.

This seaweed has become a popular delicacy among diners who want to consume healthy food.

It is believed Japan was the first country to begin studying green caviar seaweed since 1980, by growing them in the open water.

The cultivating project was then moved to Okinawa, now famous for seaweed.

Nowadays, sea grapes can be cultivated in either sea areas or ponds and lakes or be attached to rope lines or nets suspended in the sea or near the coast.

It can thrive in a closed environment and takes only 20-30 days to harvest.

Duy said that in the first years when he shifted from pharmaceutical production to sea grape farming, he encountered many difficulties.

One of the challenges was that sea grape was something new to local people, so they had no idea about farming it. Seeking a market for this product was also a major difficulty.

Until 2014, a group of Japanese experts came to sea grape farms in Ninh Hải to examine the product under a cooperation programme. Sea grapes there were of the same quality as those grown in Okinawa in Japan.

The product was then exported to Japan. Duy then had the chance to learn about the process in Japan to ensure the tight standard and requirement of this market. 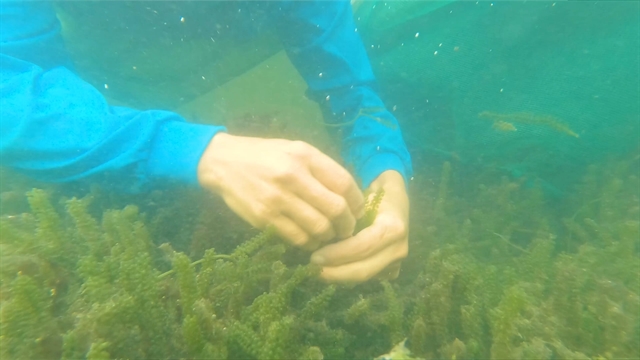 Sea grapes, or green caviar are grown in an aquarium. VNA/VNS Photo

Duy has exported his product to two major importers of Japan and the US. An average of 40 tonnes of sea grapes are shipped abroad each month, during the peak months, it can rise to 150 tonnes.

He said the factor that made grape seaweed thrive in Khánh Hòa is the farming area which has suitable salinity for sea grapes to grow well.

After being harvested from natural ponds and lakes, sea grapes are put into aquariums in the factory to ensure the best quality.

Seawater at more than five metres deep is used at the aquariums after it is filtered and goes through other stages to ensure harmful bacteria is removed and beneficial bacteria is retained.

Workers will then sort sea grapes by size and have water separated from sea grapes and pack the products.

Duy also cooperates with farmers to jointly invest and develop grape seaweed farming. He advances funds and seeds and supports them with cultivation techniques and buys sea grapes for farmers.

He said this is a promising marine farming industry, bringing great economic value. Sea grape growers should follow the technical process that has been proved to be sustainable to ensure long-term profits and high quality for the product. VNS

Seaweed offers a boost for coastal provinces' blue economy have 973 words, post on vietnamnews.vn at December 4, 2021. This is cached page on VietNam Breaking News. If you want remove this page, please contact us.