Although he lives in Japan, Nguyễn Minh Tùng is still in the habit of eating mỳ Chũ (Chũ noodles) for breakfast every day with his family.

The noodles, a speciality of Bắc Giang Province, have been well known far and wide for nearly a century.

"Compared with other noodles available in the market, we like this kind of noodles most for their nutrition and health benefits. They are cooked with beef, chicken, eggs or minced pork as a quick breakfast for my family members," Tùng said. 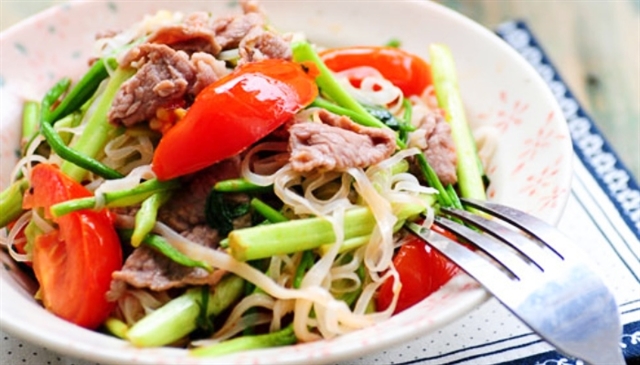 Chũ noodles can be enjoyed with beef, pork, chicken or seafood, to please all palates. Photo dienmayxanh.com

Tùng, who has been living and working in Japan for almost 15 years, said his wife asks her relatives in Bắc Giang to send the family these noodles to eat all year round.

"My two daughters particularly liked these noodles fried with shrimps and sea crab meat," he said.

Every day, the Chinese man would set up a stall at the Chũ Market, giving the dish its name. His noodles were so tasty that they often sold out, Mách recalled.

He added that mỳ Chũ has a higher quality because it is made of a special kind of rice, which is grown on hilly lands that are famous for providing a unique aroma, texture and stickiness compared with other types of rice that grow in lower lands. 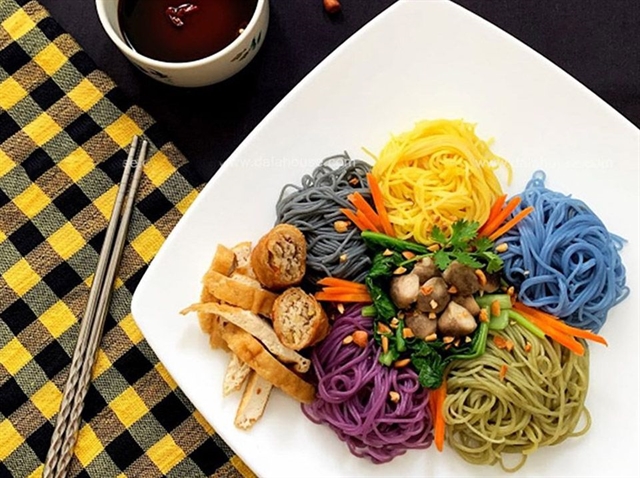 The noodles can also be stir-fried with vegetables and roots. Photo traicaycaonghe

The most important thing is that the noodles are handmade. Producers soak the rice in water for eight hours before grinding it down to a wet dough, which is stored overnight before being cooked.

Mỳ Chũ needs three people to make it: the first person cooks the wet dough on a frame over medium fire to make a thin crepe; the second brings the cakes to dry in the sun; the third person cuts it into threads and continues to dry it before it is packed, said Mách, though he acknowledged that these days machines are often employed too.

“Without using preservatives, the Chũ noodle is still soft but tasty compared with others."

A young woman named Nguyễn Thị Kiều Anh, from Lục Ngạn's Nam Dương Commune, was one of the first to make colourful noodles, which have proven a hit in the local market. 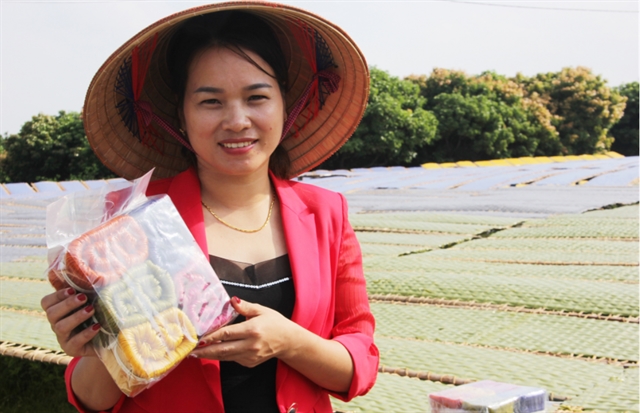 "In 2019, I decided to give up my job at the district post office to continue my traditional family job of making noodles. I use several types of fruit and vegetables mixed in with the rice to make the colourful noodles," Anh said.

She has chosen turmeric, gấc fruit ( Momordica cochinchinensis) , black sesame, beetroot, moringa, butterfly pea, rice with bran, and cashews to mix with rice to create more eye-catching colours, as well as improving the nutritional value of the noodles.

"I ground each fruit or vegetable down and mix the juice with the wet rice dough to make the noodles," Anh said, noting that after several failures, caused by climate changes or using an incorrect recipe, she finally had success.

She has made yellow, orange, pink, green, blue, black and light brown coloured noodles, which have sold well in the markets of Hà Nội, Hải Phòng, Đà Nẵng, HCM City and others via direct contracts or online.

The noodles are loved for their organic quality and speed at which they can be cooked. They only need a little minced pork, 100gr broccoli, 200ml of water and a little spice to make your own, colourful bowl of noodles. 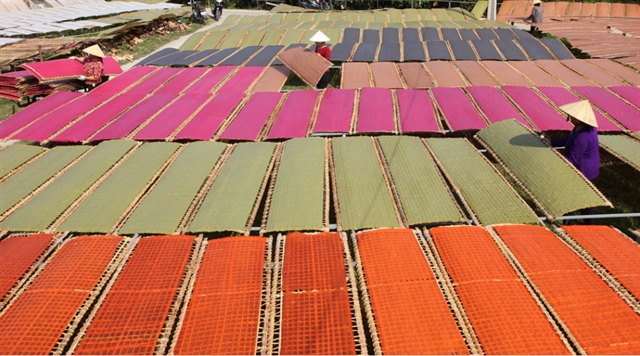 Workers lay the noodles out to dry. Photo baobacgiang.com.vn

In addition to private sales, some shops and restaurants have also started serving these noodles. Ngon Garden Restaurant in Hà Nội, which is famous for providing hundreds of delicious dishes, say most customers prefer Chũ noodles for their hotpots.

Chũ noodles have been granted a safe food certification by the Bắc Giang's Department of Industry and Trade. They were chosen as one of the top 100 specialities of Việt Nam by Vietkings last year and have been recognised as a ‘symbolic industrial item’ of the northern region in 2014, and as one of the most trusted products nationwide in 2013.

The noodle is not only popular for domestic usage but also exported abroad to China, Laos, Cambodia, Thailand, South Korea, Japan and others. VNS

Mỳ Chũ noodles - a Bắc Giang speciality loved by all have 911 words, post on vietnamnews.vn at December 7, 2021. This is cached page on VietNam Breaking News. If you want remove this page, please contact us.