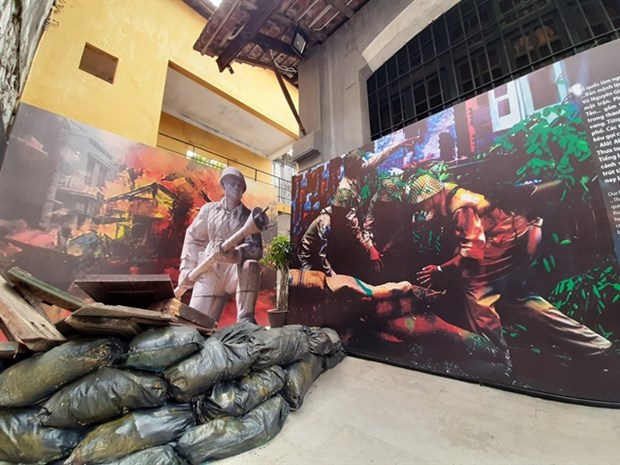 At the event (Photo: organising board)
Hanoi (VNA) – In 1946, streets of Hanoi were the scene of 60 days of intense fighting between revolutionaries under President Ho Chi Minh and the French colonial forces. Now, an exhibition on the battle is being broadcast on the social media channels of the Hoa Lo Prison .

According to the organiser, the exhibition, which is called Loi The Quyet Tu (The Vow of Fighting to the Death), is to celebrate Vietnam’s Cultural Heritage Day on November 23, the 75th anniversary of the National Resistance Day on December 19, and 77 years since the establishment of the Vietnam People’s Army on December 22.

Responding to President Ho Chi Minh's call for resistance, the people of the capital rose up to fight against the French. The army and people of Hanoi fought bitterly to achieve the country’s independence.

The scene has been painstakingly recreated, from anti-vehicle obstacles made of tables, chairs, doors and sandbags, to the chiselled walls creating secret paths, house-to-house, through the heart of the city.

These walls are imprinted with slogans written by soldiers and people: “Live and die with the capital”, “It is better to die with honour than to live with shame”, “Forever Thang Long – Hanoi”.

Placed in the most solemn position is the image of a suicide soldier, standing ready with a lunge mine to destroy enemy tanks.

The event will be broadcast until the end of March 2022 on the prison museums Facebook page, as well as on the exclusive radio channel “Time travel” on Spotify and Apple Podcast.

Hoa Lo Prison was constructed between 1886 and 1901 and was originally named Maison Centrale. It was considered one of the three most savage prisons in Vietnam, along with Con Dao and Son La prisons.

Hoa Lo was designed to hold around 500 prisoners; however, by the 1930s, the number of prisoners had soared to approximately 2,000. Most of them were political prisoners.

Between 1964 and 1973, the prison was used to house hundreds of American pilots who were shot down during bombing raids against North Vietnam.

In 1993 the government retained part of Hoa Lo Prison to transform it into a museum.

Hoa Lo Prison, which has also gone by the monikers ‘Hell on Earth’; ‘The School for Patriots’ and the ‘Hanoi Hilton’, is located at 1 Hoa Lo Street, in the centre of Hanoi.

The prison gained notoriety as a French prison for political prisoners.

There is a memorial monument dedicated to the Vietnamese patriots and revolutionary fighters who were interned at the prison.

This is also a ‘Red Address’ to educate Vietnamese people from all walks of life, especially the younger generations, on the patriotic and revolutionary traditions of those who sacrificed for the sake of the nation's independence and freedom.

The exhibition runs till the end of March at Hoa Lo Prison relic site./.

Hoa Lo Prison hosts exclusive Hanoi war exhibition have 641 words, post on en.vietnamplus.vn at December 1, 2021. This is cached page on VietNam Breaking News. If you want remove this page, please contact us.