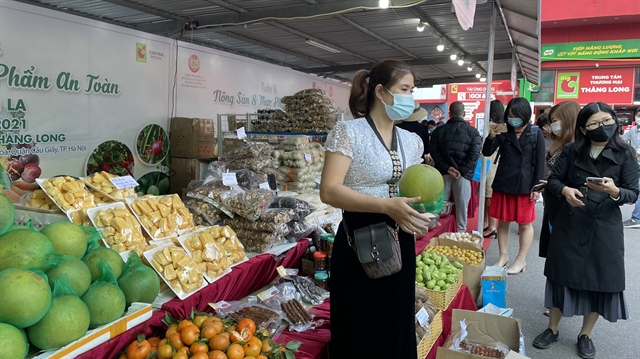 The four-day event attracted 15 local enterprises and cooperatives with 24 booths. Products on sale include organic fruit and vegetables such as oranges, grapefruits, strawberries, zucchinis, and cabbages; processed and dried food; coffee; and rice originating in Sơn La Province, which meet food safety certification such as VietGAP and GlobalGAP.

According to Nghiêm Văn Tuần, director of Sơn La Investment Promotion Centre, the event will create a good opportunity for agricultural enterprises of Sơn La Province to penetrate the Hà Nội market, build the province's agricultural brands, as well as facilitate domestic consumption and export to foreign markets.

Due to COVID-19, some products have had difficulty exporting to foreign markets, so this year they focused on the domestic market.

The total export value of the Sơn La Province in 2021 is expected at US$161.2 million in which the value of agricultural products is estimated at $150.7 million.

The event was organised by Sơn La Investment Promotion Centre and Big C Thăng Long supermarket – a member of the Central Retail Group.

A representative of Central Retail Group said that every year, the group and Big C Thăng Long coordinated with Son La Province to organise a series of programmes to promote the province's agricultural products in Hà Nội.

About 60 agricultural products of all kinds in Sơn La Province are regularly sold on the shelves of its outlets. —  VNS

First Sơn La Safe Agricultural Product Week opens in Hà Nội have 435 words, post on vietnamnews.vn at December 2, 2021. This is cached page on VietNam Breaking News. If you want remove this page, please contact us.