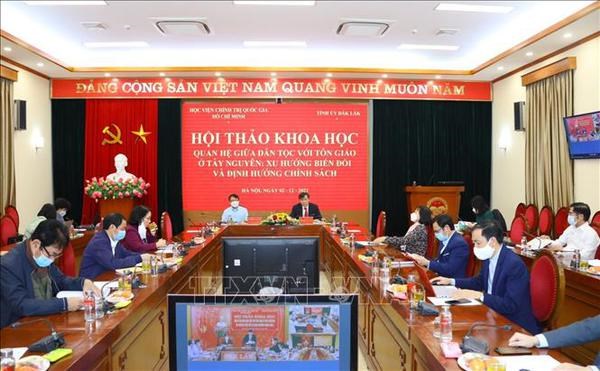 An overview of the conference. (Photo: VNA)

Hanoi (VNA) – A conference was held via videoconference on December 2 to discuss development trends of ethnic and religious issues in the Central Highlands and policy orientations, which drew a large number of specialists and researchers.

Addressing the event, Pham Minh Tan, Standing Deputy Secretary of the Party Committee of Dak Lak province, said that the five Central Highlands localities – Kon Tum, Gia Lai, Dak Lak, Dak Nong and Lam Dong, are home to more than 5 million people from different ethnic groups and religions who have lived in harmony and made great contributions to the localities' development.

However, he noted that some ethnic minority communities in the region have still faced many difficulties with a high ratio of poor households. Meanwhile, hostile forces have continuously abused ethnic and religious issues to sabotage the Party, State and administration, he added.

Tan underlined the significance of the conference in both theoretical and practical aspects, evaluating the situation and the development trends of ethnic-religious relations, thus giving scientific foundations for the completion of ethnic and religious policies in the region.

Assoc. Prof. Dr. Le Van Loi, Vice Director of the Ho Chi Minh National Academy of Politics, said that the Central Highlands region has seen a combination of traditional and imported religions and beliefs. Particularly, the region is a target of hostile forces which have abused the changes in the ethnic-religious relations to incite extreme ethnic and religious thoughts, affecting the great national unity bloc.

Loi held that in the future, major religions recognised by the State such as Buddhism, Catholicism, Protestantism and Caodaism will continue to develop in close relations with local residents. Meanwhile, the region will continue to be affected by hostile forces' attempts to increase ethnic and religious disputes, he said.

Participants at the event clarified theoretical issues related to the ethnic-religious relations and evaluated the real situation, while giving recommendations on solutions to implement ethnic and religious policies as well as socio-economic and cultural development policies in the region./.

Conference discusses ethnic, religious policy orientations in Central Highlands have 458 words, post on en.vietnamplus.vn at December 2, 2021. This is cached page on VietNam Breaking News. If you want remove this page, please contact us.