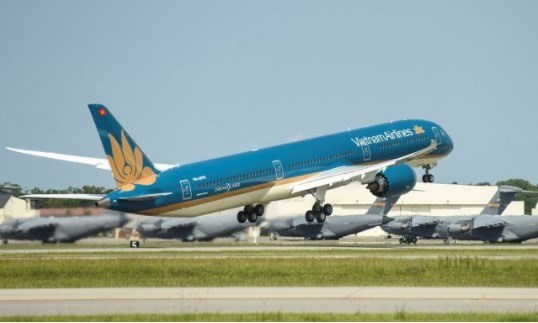 Hanoi (VNS/VNA) – Vietnam Airlines, the country’s national flag carrier, looks to dominate the Vietnam-US route as preparations have been completed for its first direct flight to the US, which is scheduled to take off on November 28, said General Director of Vietnam Airlines Le Hong Ha.

The Vietnam-US route was among one of the most in-demand pre-pandemic. There were 24,000 Vietnamese university students and a 2.2 million strong Vietnamese community in the US in 2020. Two-way trade has been on the rise in recent years reaching 90 billion USD in 2020 and projected to hit over 100 billion USD this year, making the Southeast Asian economy one of the US's top trading partners.

As a result, the airline is confident demand will quickly recover once the pandemic is put under control and mobility restrictions relaxed, Ha said.

Competition, however, is expected to be fierce as the airline must compete against lower fares of one-stop flights offered by the Republic of Korean and Japanese airlines. VietJet, another Vietnamese airline, is soon to join the competition with their direct flights to the US.

Ha said Vietnam Airlines would have to rely on superior quality services, Skytrax-certified 4-star and soon to upgraded to 5-star, to win over passengers. He said the soon-to-be-operational route had been a result of nearly two decades of preparational work. The airline had been conducting numerous market studies and building an extensive sales network over the years to find customers.

One-way tickets for the route are priced around 800 USD with taxes and fees included, according to Ha. At the beginning, tickets for US-Vietnam flights will be sold by ticket agents only due to pandemic restrictions. In the meantime, the airline will finish preparations to allow passengers to purchase tickets on its website and mobile apps in the future.

In an earlier projection, the airline said it expected to incur a loss in the amount of 30-50 million USD during the first phase of its operation with a projected scenario of seven flights per week and heavy competition.

The loss has been readjusted lower as the airline will be operating only two flights per week. While the airline will likely report a loss in the first five years, the situation should be manageable.

The first direct flight to the US by Vietnam Airlines using a wide-body Boeing 787-9 Dreamliner will take off on the evening of November 28 from Ho Chi Minh City to San Francisco and arrive in 13 hours and 50 minutes. The return flight will take off on November 29 from San Francisco and arrive in Vietnam on December 1, 16 hours and 40 minutes later./.

Vietnam Airlines aims to win largest share on direct Vietnam-US route have 534 words, post on en.vietnamplus.vn at November 26, 2021. This is cached page on VietNam Breaking News. If you want remove this page, please contact us.