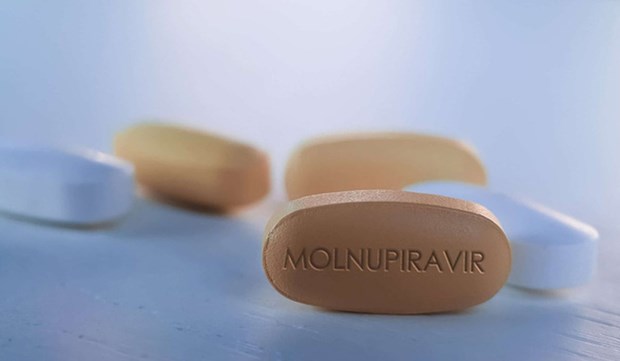 Hanoi (VNA) – Three pharmaceutical companies in Vietnam are planning to or are producing Molnupiravir pills to treat COVID-19 patients with mild or no symptoms , according to the Ministry of Health.

Of the three, the drug manufactured by Stellapharm Vietnam has been approved for clinical trial. Because Molnupiravir has yet been granted with a circulation registration number in Vietnam, the Ministry of Health is considering asking the Government for approval of using the drug in emergency cases. If approved by the Government, it is expected that three registration numbers will be issued for three types of Molnupiravir drugs manufactured by domestic pharmaceutical companies.

Regarding the effectiveness of Molnupiravir on COVID-19 patients in Vietnam, the Department of Science, Technology and Training under the Ministry of Health said that from the end of August, the ministry has piloted using Molnupiravir for non-hospitalised patients. Ho Chi Minh City was the first locality to implement this pilot programme. At present, it has been arried out in 34 provinces and cities.

The use of the drug in 22 provinces and cities show that Molnupiravir is safe and well-accepted, and has obvious effectiveness in reducing viral load, virus spread and the number of severe cases, and shortening treatment time, with no fatalities recorded.

Vietnam able to produce COVID-19 treatment drug Molnupiravir have 372 words, post on en.vietnamplus.vn at November 24, 2021. This is cached page on VietNam Breaking News. If you want remove this page, please contact us.