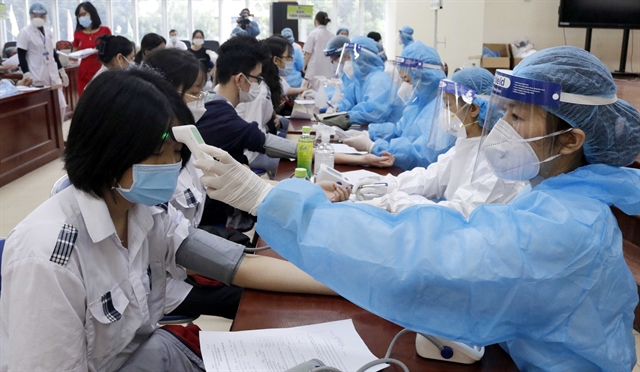 Health workers check the body temperature and heart pressure of students as per pre-COVID-19 vaccine injection procedures in the northern province of Bắc Giang on November 12. Image for illustration. — VNA/VNS Photo Đồng Thuý

HÀ NỘI — The health department of the northern province of Bắc Giang on Sunday confirmed that one among four students from two high schools hospitalised due to serious anaphylactic shock after receiving a COVID-19 vaccination has died.

Two with milder reactions were taken care of at Sơn Đông medical station in Bắc Giang, and were discharged on Saturday afternoon, according to Nguyễn Thị Thu Hương, deputy director of the provincial health department.

Two other students, both born in 2005, suffered from more serious reactions, including reports of dizziness, breathing difficulties, chest pain and nausea, and were transported to Bạch Mai Hospital in Hà Nội and both required life support (ECMO).

One did not survive after five days of treatment, while the other’s condition has stabilised.

Thu Hương said the province will continue with the vaccination efforts, as other incidents of reactions have been reported, with most being typical and mild.

As many as 3.1 million doses have been injected for this age group, with 457,059 people having received second doses, meaning 29.5 per cent of the targeted population has been given at least one vaccine shot, according to the health ministry. — VNS

Student in Bắc Giang Province dies after receiving COVID-19 vaccine have 431 words, post on vietnamnews.vn at November 28, 2021. This is cached page on VietNam Breaking News. If you want remove this page, please contact us.