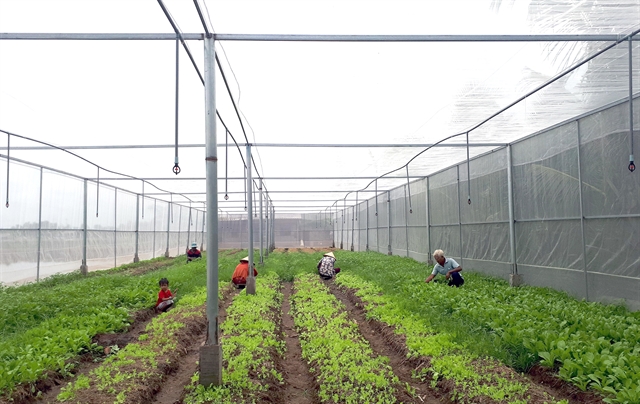 Agriculture is the province's main economic sector, with rice, seafood and fruits its key products.

Under the plan, localities have restructured crop cultivation, aquaculture and animal husbandry to suit the conditions of their areas.

Farmers have been encouraged to convert ineffective rice fields to high-value vegetables, aquaculture or animal husbandry.

The province has advantages for cow breeding as it has hot and humid weather and plenty of plants year round, and locals have had a tradition of breeding the animal for generations.

Cow and oxen breeding has improved the lives of people in rural areas and helped many households escape poverty and have a good life, according to the province's People's Committee.

In concentrated farming areas, farmers have contracts with companies to secure outlets and stable selling prices.

The province has 243 large-scale rice fields with a total area of 53,000ha. It has 1,226ha of rice planted under organic standards and 330ha planted under Vietnamese good agricultural practices (VietGAP) standards, according to the province's Department of Agriculture and Rural Development.

Huỳnh Ngọc Nhã, director of the department, said these rice areas are planted under contracts between farmers and companies, securing outlets and stable prices.

The province has also developed 420ha of fruit orchards with a production – code for export. Its fruits like milk star apple, mango, grapefruit and longan are exported to the EU and the US.

The department has helped farmers implement effective models such as two-stage shrimp breeding, or intercropping shrimp with black tilapia in the same pond.

There are 99 OCOP products in the province, including four fragrant-rice products. They are ST 24 rice, organic rice from Bờ Đập Agriculture Farm, tài nguyên rice from Phú Khang, and sữa rice from An Cư.

Sóc Trăng has created many local speciality rice varieties like ST 24 and ST 25. The former ranked third in the World's Best Rice Contest in 2017 and the latter ranked first in the contest in 2019.

Its rice varieties named ST (including ST 24 and ST 25) are also planted in other provinces and in high demand at home and abroad.

More farmers have expanded the cultivation of fragrant rice and speciality rice varieties for export in recent years, according to the department.

In Long Phú District, for instance, speciality rice varieties accounted for 46.7 per cent of the district's total rice growing area.

Last year farmers in the district applied "three increases – three reductions" and "one must and five reductions" on a total of 1,830ha of rice, and grew 80 ha of rice under VietGAP standards.

The district has more than 1,200ha of large-scale rice fields in Trường Khánh and Long Đức communes.

Lâm Văn Vũ, head of the Long Phú Agriculture and Rural Development Bureau, said the district will review crop cultivation and animal husbandry in each area and will switch to agricultural products with high competitiveness and value.

In Mỹ Xuyên District, the cultivation of local speciality ST rice varieties, including ST 24 and ST 25, accounts for 80 per cent of the district's total rice-shrimp farming area, according to the district's Agriculture and Rural Development Bureau.

The district's ST rice varieties have high quality as farmers use few chemicals under a rice-shrimp farming model.

Sóc Trăng has 179,076ha devoted to fragrant and speciality rice varieties, up 27.8 per cent against its target, according to the department.

Sóc Trăng increases yield, profits after five years of agricultural restructuring have 949 words, post on vietnamnews.vn at November 25, 2021. This is cached page on VietNam Breaking News. If you want remove this page, please contact us.