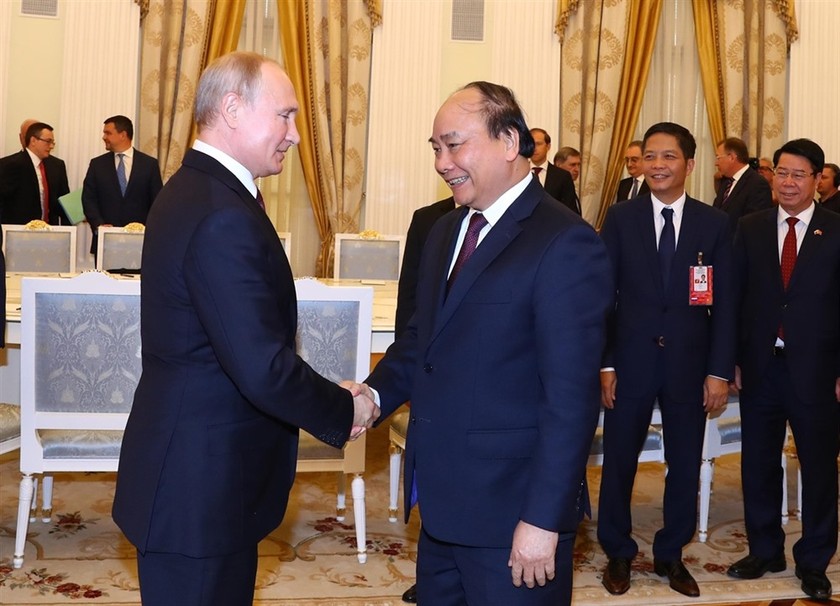 Then Prime Minister Nguyen Xuan Phuc (right) shakes hands with Russian President Vladimir Putin. VNA/VNS Photo
The bilateral political relationship has been continuously consolidated, reflected through the regular exchange of high-level delegations.
Despite serious impacts of the Covid-19 pandemic, bilateral meetings have been maintained, notably phone talks between Party General Secretary Nguyen Phu Trong and President Putin in April 2021, between President President Nguyen Xuan Phuc and President Putin in September 2021, and between National Assembly Chairman Vuong Dinh Hue and Speaker of the Federation Council of the Federal Assembly of Russia Valentina Matvienko in June 2021, and an official visit to Russia by Foreign Minister Bui Thanh Son in September 2021.
The two sides have also maintained many coordination and dialogue mechanisms such as the annual Diplomatic-Defence-Security Strategic Dialogue at the permanent deputy foreign ministerial level, and the Defence Strategic Dialogue at the deputy defence ministerial level, and regular political consultations at the deputy foreign ministerial level.
The two sides have closely coordinated and supported each other at international forums such as the United Nations, the Asia-Pacific Economic Cooperation (APEC) and the Asia–Europe Meeting (ASEM).
Russia supports Vietnam's stance on settling disputes in the East Sea via peaceful means, without using force or threatening to use force, on the basis of international law, the 1982 United Nations Convention on the Law of the Sea (UNCLOS), the Declaration on the Conduct of Parties in the East Sea (DOC), and working towards the early completion of a Code of Conduct in the East Sea (COC).
Economic and trade cooperation between the two countries has also been developed dynamically in recent years. Two-way trade reached US$4.85 billion in 2020, up 9 percent year-on-year. It hit US$3.6 billion in the first nine months of this year, up 5 percent against the same period of 2020.
As of April 2021, Russian ranked 25th among countries and territories investing in Vietnam with 144 projects worth $944 million. Meanwhile, Vietnam had invested in over 20 projects worth nearly $3 billion in Russia.
Vietnamese Ambassador to Russia Dang Minh Khoi said that President Phuc’s visit is of great significance, helping to deepen the Vietnam-Russia comprehensive strategic partnership in all fields. The visit also shows that Vietnam has actively implemented its foreign policy after the 13th National Party Congress in the spirit of independence, self-reliance, diversification and multilateralisation, for the sake of the nation, and contributing to peace and stability in the world.
Russian Ambassador to Vietnam Gennady Bezdetko affirmed that President Phuc’s visit is one of the important highlights in the bilateral agenda for 2021, which is expected to bring a new impetus to promote the Russia-Vietnam comprehensive strategic partnership in many fields.
Earlier, in an interview with the Sputnik news agency, President President Nguyen Xuan Phuc said the visit demonstrates the importance the Vietnamese Party, State and people attach to the bilateral ties as well as President Putin, a close friend of Vietnamese people.
According to President Phuc, he and President Putin will review the Vietnam-Russia relations and seek major strategic orientations to elevate the comprehensive strategic partnership to a new height across spheres.
Meanwhile, Sputnik described Phuc's visit as an impulse that helps to create new breakthroughs for the comprehensive strategic partnership, thus bringing benefits to Vietnamese and Russian people.

President’s Russia visit hoped to deepen comprehensive strategic partnership have 613 words, post on www.sggpnews.org.vn at November 30, 2021. This is cached page on VietNam Breaking News. If you want remove this page, please contact us.