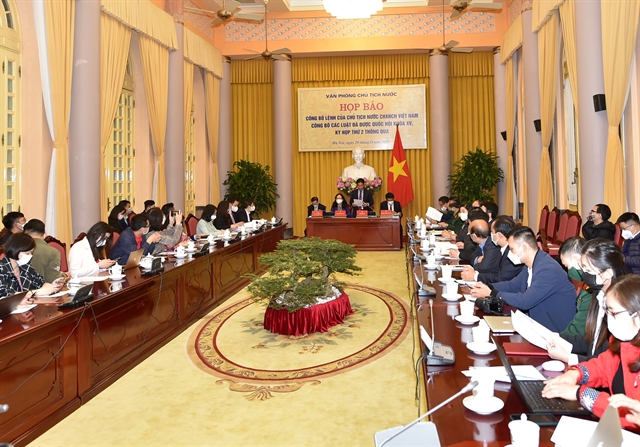 HÀ NỘI — The Office of the President yesterday held a press conference to announce President Nguyễn Xuân Phúc's order on the promulgation of two new laws that were approved at the 15th tenure's National Assembly meeting.

The amended Law on Execution of Criminal Judgments has two articles in order to meet requirements and ensure the right roadmap for Việt Nam to realise commitments of the Comprehensive and Progressive Agreement for Trans-Pacific Partnership and solve urgent problems arising in practice caused by natural disasters and epidemics.

The law gives power to commune-level police to conduct criminal examination and preliminary verification of crime denunciations and report or proposal of execution.

The police of communes, wards, townships are responsible for receiving denunciations and reports of crimes, making a record of receipt, conducting preliminary examination, verifying and immediately transferring the denunciations along with relevant documents and exhibits to competent investigating agencies.

The new law also adds a detailed basis for the temporary suspension of criminal denunciations and reports or proposals of execution due to unavoidable reasons or natural disasters and epidemics.

The Chief Procurator of the Supreme People’s Procuracy is in charge of coordinating with the Minister of Public Security, Minister of National Defence and heads of other relevant agencies to issue details on the execution suspension.

The amended Statistics Law adds a number of articles to create a legal basis for the collection and calculation of statistical indicators, and to compile Gross Domestic Product (GDP), GRDP (Gross Regional Domestic Product) and re-evaluate GDP scale, improving the quality of statistics and international integration.

The law assigns Minister of Planning and Investment to coordinate with ministries, sectors and localities to send a review of GDP scale once every five years to the Government before submitting it to the National Assembly for approval.

The appendix of national statistical indicators issued together with the 2015 Statistics Law has been replaced with a new one. — VNS

President's Office announces two new laws have 504 words, post on vietnamnews.vn at November 30, 2021. This is cached page on VietNam Breaking News. If you want remove this page, please contact us.