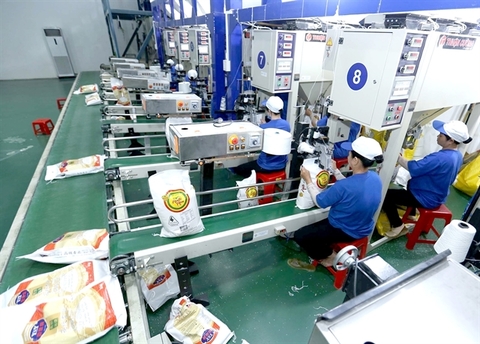 Workers of the Trung An Hi-tech Agriculture Joint Stock Company in Can Tho City work on an assembly packaging rice for exports. VNA/VNS Photo Vu Sinh

After a decline in output and exports in the second and third quarters due to the COVID-19 pandemic, many industries have seen a rebound in exports and strong growth since October.

Trung An Hi-tech Agriculture Joint Stock Company in Can Tho City said it has signed a contract to export 15,000 tonnes of rice to South Korea.

The company has opened a representative office in Hamburg, Germany, to exploit the EU market since the import tariffs on Vietnamese rice have been reduced under the EU-Viet Nam Free Trade Agreement (EVFTA), Pham Thai Binh, its general director, said.

Deputy Minister of Industry and Trade Dang Hoang An said the EVFTA would help Viet Nam participate in the process of restructuring supply chains with EU partners.

After a long period of production suspension or reduction in output, seafood processing companies are recovering, but cannot keep up with export demand as orders keep coming.

In the third quarter, the company’s revenues fell by 36.7 per cent year-on-year to VND2.78 trillion despite a sharp rise in export prices as demand surged in major markets.

Le Van Diep, its deputy general director, said that the fourth outbreak of the coronavirus, with the Delta variant spreading in the south, disrupted supply chains, including in the shrimp industry.

Shrimp processing plants in the Mekong Delta had to house their workers and comply with other restrictions, which reduced their capacity by 30-70 per cent, meaning they could not fulfill customers' orders, leading to a decrease in revenues, he added.

The Viet Nam Association of Seafood Exporters and Producers said after declining for two consecutive months, the country's seafood exports rose by 47 per cent in October to US$918 million.

Do Xuan Lap, chairman of the Viet Nam Timber and Forest Products Association, said the recovery by businesses supplying wood products has been faster than predicted.

In the first 10 months of the year, exports of wood and wood products jumped by 23.4 per cent year-on-year to nearly $12 billion, he said.

Now that the pandemic is being controlled gradually, wood processing hubs such as HCM City and Binh Duong, Dong Nai and Tay Ninh provinces are recovering rapidly, he said.

"This is a very positive sign for the industry."

According to the Ministry of Agriculture and Rural Development, exports of agricultural, forestry and fishery products in October were worth $3.4 billion, up 4.2 per cent from September.

If this pace is maintained in the remaining two months of 2021, the export target of $44 billion is completely feasible, it added. — VNS

Many industries make rapid recovery in production, exports in October have 539 words, post on bizhub.vn at November 28, 2021. This is cached page on VietNam Breaking News. If you want remove this page, please contact us.