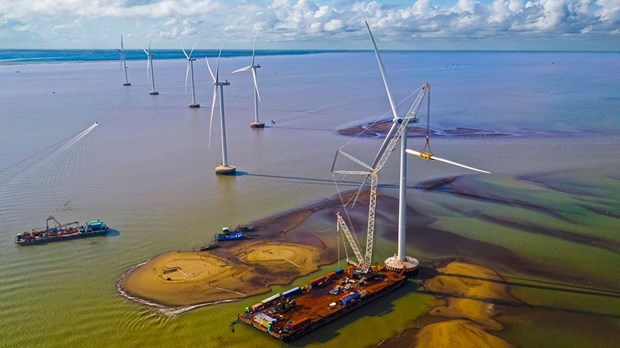 Ben Tre (VNA) – V1-3 Ben Tre wind power plant , the first of its kind in the Mekong Delta province of Ben Tre, was put into operation on November 28.

Construction of the 7-turbine wind power plant began in April 2020 with a total investment of 1.5 trillion VND (over 66.1 million USD). It has a capacity of 30MW.

The plant is expected to generate an average output of 90 million kWh per year, and annually contribute 20 billion VND (over 882,000 USD) to the State budget in the first 14 years of its operation. 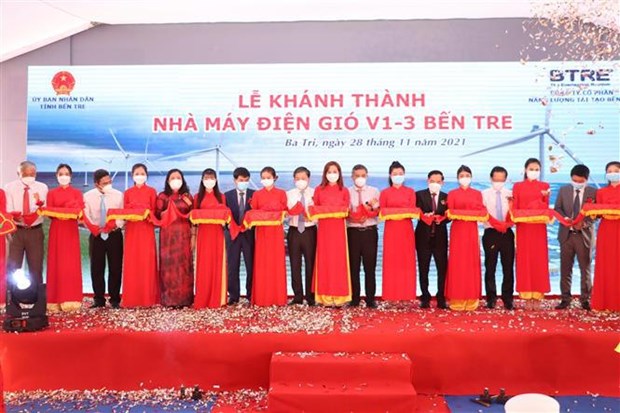 At the inauguration ceremony of the plant. (Photo: VNA)

He praised the investor, local authorities and sectors for their efforts and support for the project, while asking the provincial Department of Industry and Trade to coordinate with relevant agencies to remove difficulties and obstacles to speed up construction of other wind power plants in Ben Tre .

Currently, 19 wind power projects are being implemented in the province. In 2022 and the following years, 17 other projects will be developed with a total capacity of more than 914 MW.

In addition, Ben Tre has proposed to add 26 projects with a total capacity of 6,400 MW. By 2025, power projects in the province are expected to generate an average power output of over 4.5 billion kWh with a total revenue of more than 10 trillion VND per year./.

First wind power plant in Ben Tre put into operation have 422 words, post on en.vietnamplus.vn at November 29, 2021. This is cached page on VietNam Breaking News. If you want remove this page, please contact us.