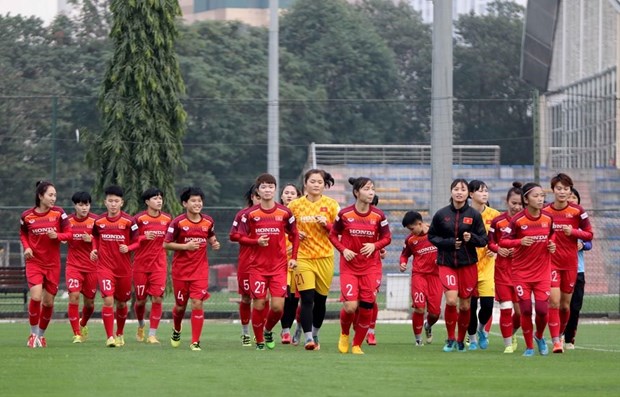 Hanoi (VNA) – Twenty-eight players will be called to prepare for the final round of the 2022 Asian Football Confederation (AFC) Women's Asian Cup in India, according to the Vietnam Football Federation (VFF).

Head coach Mai Duc Chung said aside from some new faces like Tran Thi Hai Linh and Dao Thi Kieu Oanh, those who have recovered from injuries such as Pham Thi Tuoi and Nguyen Thi Lieu will also be gathered.

Most of the ones attending the qualifiers are maintained since Vietnam will face strong rivals in the final round, namely Japan, the Republic of Korea, and Myanmar.

The squad are still being rejuvenated, but this time's task needs footballers experienced in playing at international tourneys, Chung noted.

The women's national football team will have their first training session at the Vietnam Youth Football Training Centre in Hanoi on November 28.

VFF Secretary-General Le Hoai Anh said the federation is liaising with international partners to arrange overseas training for the team before going to India for the Asian Cup finals. As the team will have to face very strong rivals and there aren't many chances, the preparation process needs to create the most favourable conditions for them to have the best morale./.

Female footballers called to prepare for Asian Cup finals have 394 words, post on en.vietnamplus.vn at November 26, 2021. This is cached page on VietNam Breaking News. If you want remove this page, please contact us.