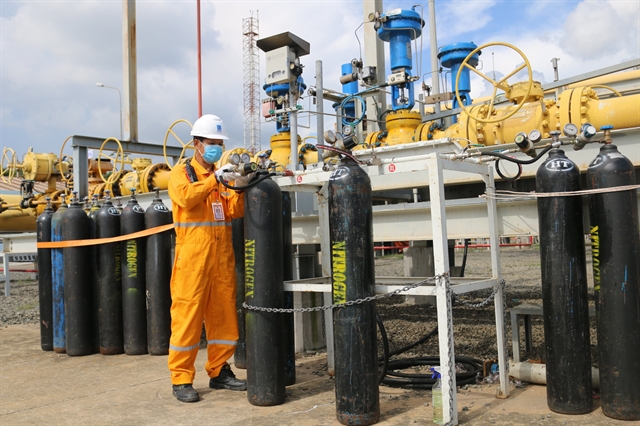 HÀ NỘI — The benchmark indices finished higher on Monday, but the VN-Index failed to cross over the key psychological level of 1,400 points level as the rising selling force weighed on the market in the late session.

The market opened the morning session on a positive note, with bullish sentiment pushing the benchmark to 1,399.97 points. However, the rally was capped by profit-taking activities in the last minutes.

The market’s breadth was negative as 193 stocks climbed and 245 declined, while the liquidity remained high. Accordingly, more than 795.9 million stocks were traded on the southern bourse, worth over VNĐ23.65 trillion (US$836.8 million).

The index’s uptrend was mainly driven by some large-cap stocks in energy, banking and manufacturing sectors. The 30 biggest stocks tracker VN30-Index posted a gain of 5.65 points, or 0.38 per cent, to 1,510.49 points. Of which, sixteen stocks in the VN30 basket jumped, while twelve stocks fell and two stocks ended flat.

PetroVietnam Gas (GAS) continued to lead the market’s uptrend, with an increase of 4.02 per cent. Another big energy stock contributing to the gain was Petrolimex (PLX). The company’s shares surged nearly 1.5 per cent yesterday.

Supporting the market, VPBank (VPB), Hòa Phát (HPG) and Masan Group (MSN) also witnessed good performance, up in a range of 1 – 2.4 per cent.

On the downtrend, many pillar stocks extended losses in the late session as the selling force got stronger.

Vietinbank (CTG) was the biggest loser among these stocks, down 1.47 per cent. It was followed by Vietcombank (VCB), Sabeco (SAB) and Vietnam Rubber Group (GVR).

In its daily report, Sài Gòn – Hà Nội Securities JSC (SHS) expected that the market benchmark is likely to continue its rallies to head toward the resistance level of 1,400 points this week. And the market can figure out the next trend after the index breaches that level.

On the Hà Nội Stock Exchange (HNX), the HNX-Index also posted a small gain after staying unchanged in the previous session. It was up 0.04 points, or 0.01 per cent, to 384.88 points.

During the session, investors poured over VNĐ2.8 trillion into the northern market, equivalent to a trading volume of 124.3 million shares.

VN-Index hovers around 1,400 points due to rising selling pressure have 504 words, post on vietnamnews.vn at October 18, 2021. This is cached page on VietNam Breaking News. If you want remove this page, please contact us.