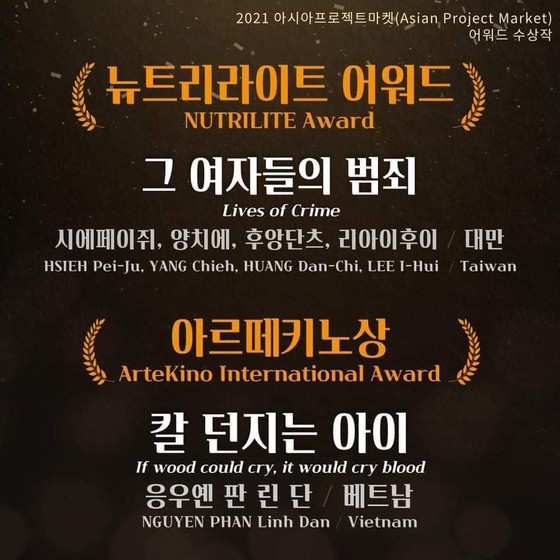 The winner received a cash prize of EUR6,000 while her film that is adapted from the novel titled Tam Van Phong Dao (The knife throwing target) by Mac Can has been selected for screening on the ARTE Kino Festival's website.
Nguyen Phan Linh Dan graduated from the faculty of Film and Television at the New York University in the US. Her movie, Lost participated in the category of Short film corner at the 2016 Cannes Film Festival.
She was also director of photography of the movie, Bi Mat Cua Gio (Secrets of the Wind) directed by Nguyen Phan Quang Binh, which premiered at the 2019 Busan International Film Festival.
Two Vietnamese films competed at the Asian Project Market at this year's Busan International Film Festival, including 'Memento Mori: Water by director Marcus Manh Cuong Vu.

The 2021 Busan International Film Festival 's Asian Project Market, the largest investment and co-production market in Asia, selected 25 final selections from 15 different countries!
Asian Project Market 2021 opened for three days from October 12-14 and was held online for international directors, producers and investors of the projects. Organizers report a total of 100 participants from 91 organizations conducted 515 official business meetings during the event.
The film festival wrapped with the top Busan Award going to Jero Yun's Secret Of My Father. The organizer also revealed other winners, including Kamila Andini who took the CJ ENM Award for the film "Before, Now & Then", Lim Sun-ae got the KB Award for the film "Fixed Love, Fixed Girl", Hsieh Pei-Ju received the NUTRILITE Award for the movie "Lives of Crime", Abinash Bikram Shah received the Pop Up Film Residency Award for the film "Elephants in the Fog", Kim Bora got the MONEFF Award for the movie "Spectrum ".

Vietnamese movie honored at Busan Int'l Film Festival 2021 have 456 words, post on m.sggpnews.org.vn at October 16, 2021. This is cached page on VietNam Breaking News. If you want remove this page, please contact us.