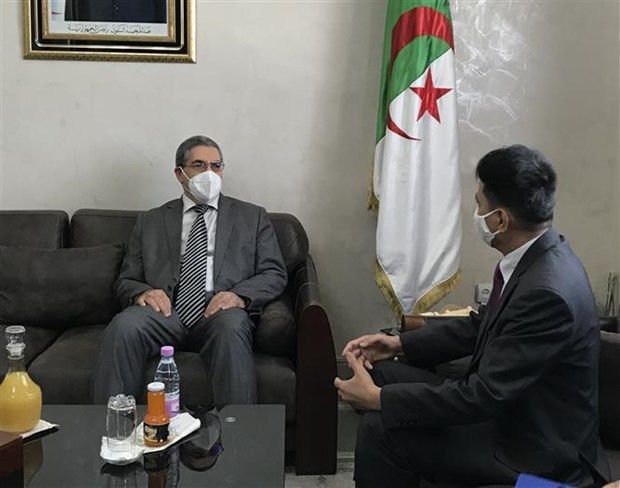 Algiers (VNA) – A working delegation from the Vietnamese Embassy in Algeria led by Ambassador Nguyen Thanh Vinh paid a working trip to Constantine province, the third largest economic hub of the African country that has advantages in tourism, farming, breeding and pharmaceuticals.

During the visit from October 20-21, the delegation had a working session with Constantine Governor Messaoud Djari , during which Vinh underlined that Vietnam and Algeria have shared sound traditional ties and many similarities.

Algeria is one of the most important partners of Vietnam in Africa, he said, noting that the two sides have working together to promote their relations in various fields such as politics, economy, trade, investment and labour export.

The diplomat said that he was impressed by high development potential of Constantine province and affirmed that the embassy is willing to help connect businesses of the province and Vietnamese partners.

For his part, Djari said that the province is ready to coordinate with the Vietnamese side to foster collaboration in areas of shared interest.

Briefing the guest on the economic development strategy of Algeria and Constantine in particular, he underlined that economic recovery is the current top priority, adding that the country aims to develop a diverse economy which is less independent on oil.

He suggested that the province and Vietnam should cooperate in areas where Constantine has strengths and potential such as tourism, agriculture and pharmaceutical industry.

During the trip, Vinh also had a working session with President of the Constantine Chamber of Commerce and Industry Souici Larbi, during which the two sides briefed each other on their economic situation and potential, and discussed measures to promote bilateral ties in all fields, especially economy and trade.

Larbi said that the pharmaceutical industry, agriculture and construction are among major development focuses of Constantine, adding that the locality is constructing a number of industrial parks to promote its strengths.

He hoped that Vietnam will share experience in socio-economic development with Algeria and Constantine.

On the occasion, the ambassador also attended the opening of the real estate exhibition "Bâti-Est-Expo 2021," during which he introduced to local firms a handbook on Vietnamese prestigious businesses in different areas./.

Vietnam seeks to bolster economic, trade partnership with Algerian province have 390 words, post on en.vietnamplus.vn at October 22, 2021. This is cached page on VietNam Breaking News. If you want remove this page, please contact us.