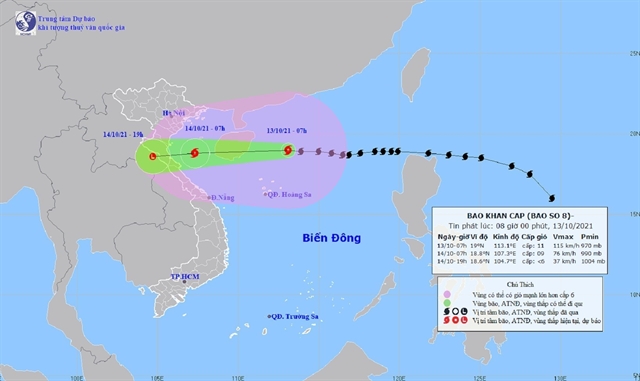 HÀ NỘI — Typhoon Kompasu, the eighth storm to hit Việt Nam this year, will land between the central provinces of Thanh Hóa to Quảng Bình and weaken to a tropical depression by 4pm on Thursday.

At 4am on Wednesday, the eye of the storm was about 270km to the northeast of the Hoàng Sa (Paracels) Archipelago.

The strongest wind speeds were recorded at about 100 to 120km per hour.

The typhoon is forecast to move west at a speed of 20km per hour.

Once it weakens to a tropical depression, it will sustain winds of 40 to 50km per hour.

At 4am on Friday, the tropical depression will enter the central region of Laos with wind speeds decreasing to below 40km per hour.

Heavy rain is predicted from Wednesday afternoon to Friday in the northern region and Quảng Trị Province, with rainfall to 200 millimeters per. Regions from Thanh Hoá to Quảng Bình would also observe heavy rains with levels up to 350 millimeters. Flash floods and landslides may occur in certain areas, according to the National Center for Hydro-Meteorological Forecasting.

The tropical depression combined with a new cold wave in the north-central region will cause more heavy rain.

Stressing the need for plans to evacuate locals in high-risk areas to safer places while still ensuring pandemic prevention, he asked the localities to pay special attention to giving safe shelter and support to migrant workers on the way to their hometowns from southern localities.

It is necessary to ensure the safety of dams, dykes and reservoirs while preparing forces and vehicles for rescue work, he said.

Representatives of localities that are forecast to be hit by the typhoon – Thanh Hóa, Hà Tĩnh, Nghệ An, Quảng Bình, Quảng Trị, and Thừa Thiên-Huế – said that they had made preparations to brace for the typhoon, including alerting fishing vessels at sea and designing plans to respond to heavy rain and flooding.

Tropical storm Kompasu has set off landslides and flash floods in the Philippines, leaving at least 11 people dead, according to Aljazeera. — VNS

Typhoon Kompasu to weaken to tropical depression after making landfall in central region have 548 words, post on vietnamnews.vn at October 13, 2021. This is cached page on VietNam Breaking News. If you want remove this page, please contact us.