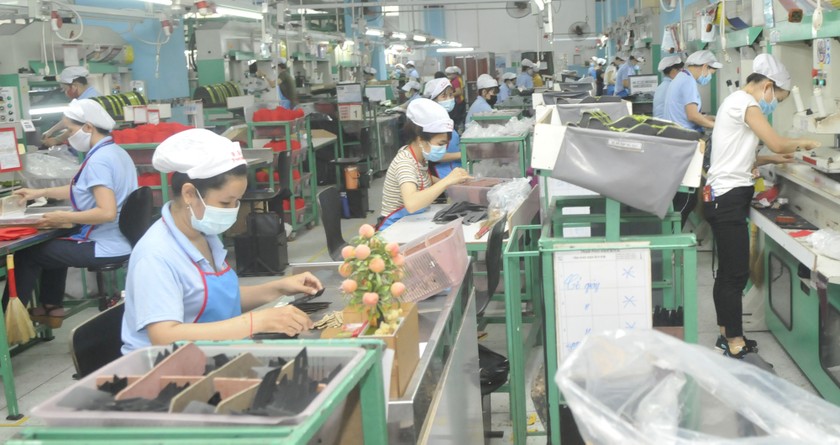 Accordingly, those enterprises proposed the Mekong Delta province of Tien Giang not to comply with the "three-on-site" production model or "one route, two destinations", for employees living in pandemic areas of level 1, 2, 3 who have got at least one shot of Covid-19 vaccine in 14 days and use their personal vehicles or buses to return to their company from the beginning of November.

Besides, Tien Giang Province was proposed not to extend the lock-down time from 7 p.m. to 5 a.m. for workers on the way to their companies, to perform rapid antigen test and not to obligate the PCR testing on the first day to work and the enterprises will carry out the weekly test in accordance with the regulations.

Speaking at the press conference, Head of the Management Board of Industrial Parks of Tien Giang Province Nguyen Nhat Truong informed that nearly 100 percent of employees got their first dose of the vaccine while nearly 40 percent of workers received their second shot.

According to Mr. Truong, the Provincial People's Committee has approved the production plans for three out of 19 enterprises and the province sent an official letter to the Prime Minister to report the proposal of 19 enterprises in the afternoon of October 21.

Chairman of the Provincial People's Committee of Tien Giang Nguyen Van Vinh said that the province only encouraged the people to limit going outside from 7 p.m. to 5 a.m. Therefore, the local residents traveling outside the timelines will be not handled.

Tien Giang Province reports PM on proposal of 19 enterprises have 377 words, post on www.sggpnews.org.vn at October 22, 2021. This is cached page on VietNam Breaking News. If you want remove this page, please contact us.