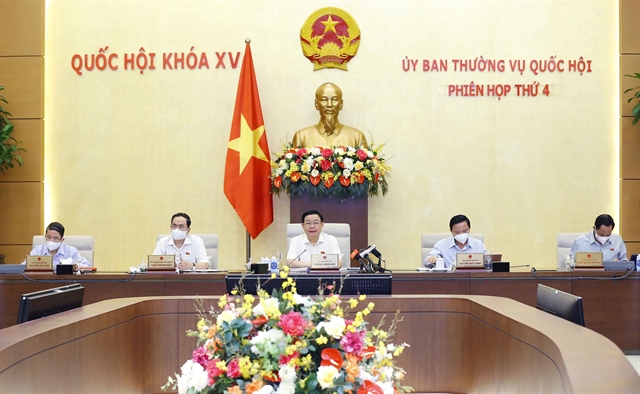 HÀ NỘI — The National Assembly (NA) Standing Committee on Wednesday morning discussed preparations for the second session of the 15th NA, which is scheduled to last for 17 days.

General Secretary of the NA and also chairman of the NA Office Bùi Văn Cường said that the session would discuss a report on COVID-19 prevention and control, including special measures to cope with the pandemic, and also discuss socio-economic development and the State budget.

The second session will also consider a draft resolution for online trials, consider withdrawing the report on the implementation of the Investment Protection Agreement between Việt Nam, the European Union (EU) and EU members as per the Government’s request. By the end of September this year, this agreement has not come into force because only eight out of 27 EU members ratified the agreement.

In the meeting, deputies also gave opinions about a project of ensuring water security, dam and reservoir safety in the 2021-30 period.

Because it is a big project with many important national issues and a long-term vision, the NA Standing Committee proposed to ask for instruction from the Politburo. The Politburo suggested not arranging the issue in the schedule of the NA's second session to have more time to prepare carefully.

It is planned that in the second session, the NA will consider and approve two law projects, five draft resolutions and give opinions on five law projects.

As for voting for approval, general secretary Cường said that electronic voting would be applied as usual via software on iPads.

A deputy proposed to replace the question and answer session by "listening to citizens' suggestions". Via NA deputies, citizens can suggest measures to improve manufacturing after the pandemic, and bring the socio-economy to a new normal.

General secretary Cường answered that reports by the Việt Nam Fatherland Front Central Committee, in which summing up voters' and citizens' opinions, had brought the people's wishes to the NA. The question and answer session was a supervision activity, expressing the companionship of the NA and the whole political system, especially the Government, to resolve difficulties, find effective solutions for pandemic prevention and control, recover production and ensure social security.

Chairman of the NA's Committee on Legal Affairs Hoàng Thanh Tùng said that the working time being shortened to 17 days was a great improvement. It was much shorter than usual year-end meetings in previous years because year-end meetings must consider many issues while must still ensuring quality.

If the session was organised reasonably, this would be an experience that could be promoted in the future, he said.

Emphasising that this would be a very important meeting because it would decide the framework for 2022, NA Chairman Vương Đình Huệ said that the meeting time would be shortened, but ensure the highest quality to have the most correct law projects and decisions.

"The pandemic was basically controlled, but the situation is still complicated requiring great efforts to achieve the highest results. The common spirit is that the NA would accompany the whole country,” said Huệ. — VNS

Standing Committee discusses preparation for second session of the 15th NA have 797 words, post on vietnamnews.vn at October 14, 2021. This is cached page on VietNam Breaking News. If you want remove this page, please contact us.