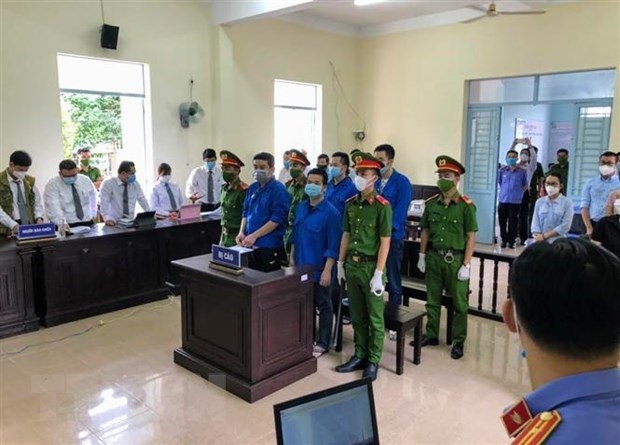 The defendants at the court (Photo: VNA)

Can Tho (VNA) – The People's Court of Thoi Lai district in Can Tho city on October 28 announced prison sentences ranging from two years to four and a half years for Truong Chau Huu Danh and members of the "Bao sach" group.

The defendants were sentenced on the charge of “abusing the rights to freedom and democracy to violate the interests of the State and the legitimate rights and interests of organisations and citizens" under Article 331 of the 2015 Penal Code (revised and supplemented in 2017).

Danh, 39 from the southern province of Long An, received a jail term of four and a half years.

36-year-old Doan Kien Giang and 39-year-old Le The Thang, from HCM City and Hanoi, each was sentenced to three years in prison.

They are banned from journalism practice within three years after they complete the jail terms.

According to the indictment, in August 2019, Danh and his accomplices created the Facebook fanpage named "Bao sach," a group named "Lam bao sach" and a Youtube channel named "BS Channel" to post 47 articles and video clips on issues of public concern.

The articles and video clips posted by the group used unverified, untrue, and one-sided information that intentionally misled public opinions, causing misunderstanding and creating conditions for negative comments, thus inciting people to oppose guidelines of the Party, and policies and laws of the State.

Their acts have also affected the management work in localities, triggered confusion, suspicion in the public and undermined public trust in the State and all-level authorities in social management.

During the investigation, Danh and his accomplices admitted to their wrongdoings.

After Danh was arrested in late 2020, the remaining members left the group. Thang removed the Facebook page and Youtube channel and left the “Lam bao sach” group./.

Prison sentences announced for Truong Chau Huu Danh, his accomplices have 439 words, post on en.vietnamplus.vn at October 28, 2021. This is cached page on VietNam Breaking News. If you want remove this page, please contact us.