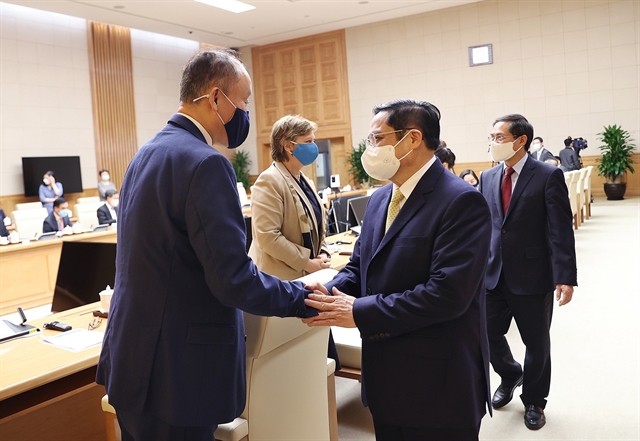 The PM emphasised that Việt Nam always treasured the UN's valuable assistance for the country over the past four decades.

At this difficult time of the country’s current fight against COVID-19, the UN's aid had come in the forms of medical equipment and supplies, professional and policy advice on pandemic prevention and control, socio-economic recovery and development, with a commitment to supplying Việt Nam with 38.9 million doses of vaccines this year through the COVAX Facility and about 19 million realised to date.

He suggested that the UN organisations boost the COVAX Facility's vaccine support for Việt Nam, promote vaccine production research and cooperation in the country, and provide medical supplies and assist Việt Nam in accessing treatment drugs.

The Government leader affirmed that strengthening cooperation with and participation in the UN was a priority in the nation's foreign policy of independence, self-reliance, diversification and multilateralisation of relations, and proactive, comprehensive, extensive and effective international integration.

Việt Nam had been always an active member of the UN, contributing to the organisation's joint efforts in response to global challenges, peace promotion, and sustainable development, Chính said.

The Prime Minister asked the UN to support Việt Nam in carrying out key tasks and strategic breakthroughs set out by the 13th National Congress of the Communist Party of Việt Nam.

Congratulating Việt Nam on controlling the fourth wave of COVID-19, the participating UN representatives expressed their impressions at the nation’s all-people approach to the pandemic fight and its treatment of COVID-19 patients.

They said they welcomed the Vietnamese Government’s resolution on recovery and safe adaptation to the pandemic, adding that the UN would continue to accompany and support the country in economic recovery and development.

They also appreciated the nation's role, position and active participation in the UN Security Council and other UN mechanisms and forums, thereby contributing to consolidating and promoting peace, stability, cooperation, and development in the region and the world. VNS

PM hosts UN representatives in Việt Nam, asking for help in setting policies for safe COVID adaptation have 663 words, post on vietnamnews.vn at October 22, 2021. This is cached page on VietNam Breaking News. If you want remove this page, please contact us.