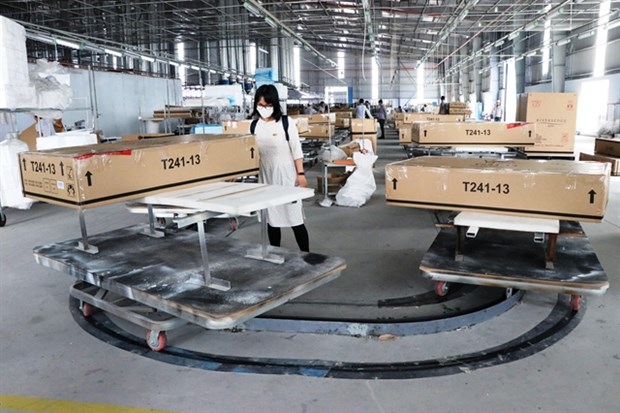 Packing line at Trieu Phu Loc Furniture Co in Binh Duong province. The Government, localities and businesses are rushing to put the economy back on track. (Photo: VNA)

Hanoi (VNS/VNA) – Vietnam's economy has recently received many optimistic signals from the business community, which are fuelling expectations of a stable and rapid recovery after a long disruption due to the COVID-19 pandemic.

Last week, the Dong Nai Industrial Zone Authority announced nearly 1,400 enterprises, or more than 80 percent of those operating in 31 industrial parks in the province, have resumed operations, drawing more than 334,000 workers back to work which represents 54 percent of total number of labourers at the local industrial parks.

In Binh Duong, the local authority said it was striving to have 90 percent of enterprises resume operations by the end of this month and 100 percent by the end of this year. The management board of provincial IPs is stepping up vaccinations for experts and workers towards the goal of returning to normal by early 2022.

Secretary of the provincial Party Committee Nguyen Van Loi committed all possible support to firms to return to work in safe conditions.

In the capital city, after easing many restriction measures, Hanoi's businesses are speeding up production to secure new orders and restore production. In nine industrial parks in the city, the number of businesses operating normally has reached over 95 percent.

These numbers have partly shown great efforts of the Government, localities and businesses themselves in putting the economy back on track.

The prolonged lockdowns due to the spread of the virus, especially in the southern region which is home to the country's production hubs, has disrupted most economic activities in the past two months.

Vietnam's gross domestic product (GDP) increased by only 1.42 percent in the first nine months after recording a decline of 6.17 percent in the third quarter. It is also the first quarterly decline recorded since 2000.

Income and employment are also seriously affected, especially for workers in industrial zones and people who depend on services. The unemployment rate in the third quarter was 3.72 percent and the underemployment rate among people of working age was 4.39 percent, the highest since the first quarter of 2020.

Despite some early confusion in containing the disease in some provinces, with the great efforts, solidarity and determination of the Government and the entire society, the pandemic has been gradually put under control in hotspots such as HCM City, Binh Duong, Dong Nai and Long An, paving the way for loosening measures to recover the economy.

Many policies have been adjusted to adapt to the new context and are introduced, giving hope to businesses and pulling them through this hard time.

During an online meeting on October 17, Prime Minister Pham Minh Chinh reaffirmed pandemic prevention and control policies must be unified nationwide, facilitating the implementation of measures to allow enterprises to resume operation and get workers back to work.

Resolution 128 recently issued by the Government on “Safe adaptation, flexibility and effective control of the COVID-19 pandemic" which sets out criteria to assess the level of pandemic risk and specifies response measures in a unified application to all localities, agencies and businesses, is good news for enterprises.

According to businesses, this resolution helps them define more clearly the risk levels which let them know when they can continue operation or when they need to temporarily halt operation ("on" or "off") or "off" to any degree. Unified regulations will also prevent local authorities from creating or applying regulations of their own will, facilitating companies in building and implementing their business plans.

Earlier this month, the Ministry of Labour, Invalids and Social Affairs (MOLISA) announced that from October 8, new regulations in Resolution 68 will loosen conditions and add more workers and businesses to the list eligible to receive funds from the support package worth 26 trillion VND (1.1 billion USD).

Since adoption in July, authorities in provinces and cities across the country have been quickly implementing measures to help people and businesses.

In the latest update from 63 provinces and cities, more than 15 trillion VND has been disbursed under Resolution 68 by the end of September, of which receivers include 376,610 employers and nearly 18.6 million people.

In 25 southern provinces and cities, total support value reached more than 11.7 trillion VND, accounting for 75 percent of the whole country.

However, enterprises are still facing many challenges, including the shortage of workers after a huge number returned to their hometowns during the lockdown period, rising costs of input materials and the lack of capital for production.

Vo Tri Thanh, Director of the Institute of Branding and Competition Strategy, said support policies need to be implemented synchronously and quickly to help businesses recover and catch up with the global trend, avoid letting them lose business opportunities which may be hard to find again.

"The most important thing for businesses now is a support package which is big enough (in value), large enough (in volume) to comprise of necessary entities in need of support and be implemented quickly enough," Thanh told Vietnam News.

The pandemic remains complicated and unpredictable and the country is facing a wide range of heavy consequences in all aspects of socio-economic life.

The Ministry of Planning and Investment is working with other Governmental agencies, local authorities, business associations and industry experts to build a comprehensive programme to steer Vietnam’s economic recovery in 2022-2023, to connect supply and demand and to support businesses and the public, especially vulnerable groups in the post-pandemic period./.

Optimistic business signals fuel expectations of stable and rapid recovery have 1061 words, post on en.vietnamplus.vn at October 20, 2021. This is cached page on VietNam Breaking News. If you want remove this page, please contact us.